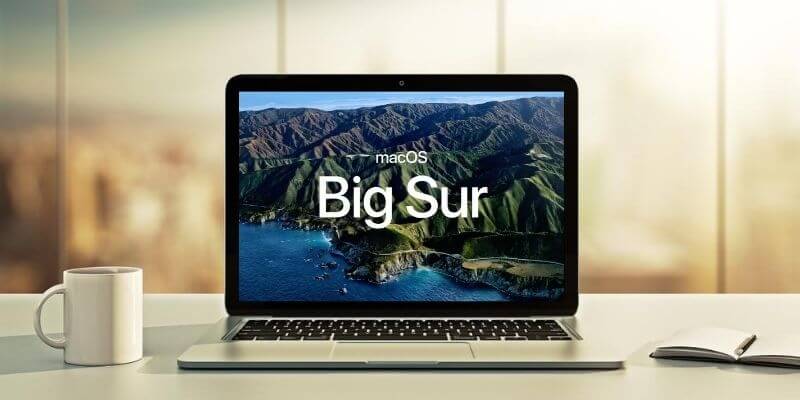 I just installed the public beta of macOS Big Sur (update: the public version is now available to download). So far, I’m not disappointed. Safari has received a speed boost and extensions, and other apps have been updated, too. I’m really enjoying it so far.

Each operating system update adds features and requires more system resources than the previous version, including memory and storage space. They’re designed for the specs of the current year’s Mac, which means it will almost always run slower on your Mac than the previous version. That leads us to an important question: is speed an issue with Big Sur, and if so, how do you handle it?

To make sure I didn’t miss any speed issues, I tried to install the new operating system on my oldest computer, a mid-2012 MacBook Air. Early reports indicated that it would be supported, but unfortunately, it’s not compatible. 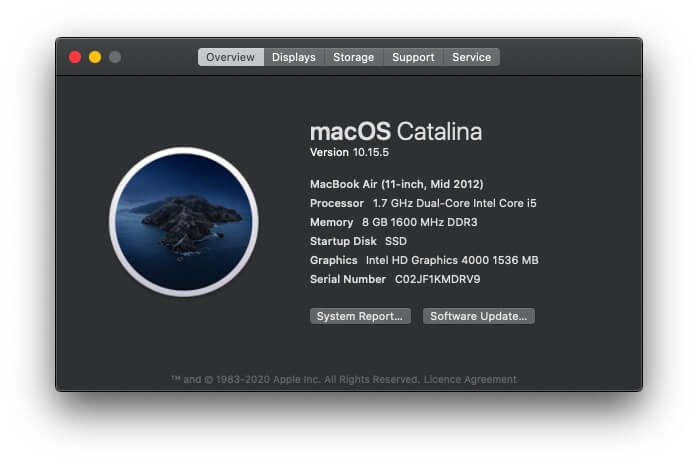 Instead, I took a calculated risk and installed it on my main work machine, a 2019 27-inch iMac. After last year’s upgrade fiasco, I expected Apple to double-check everything to ensure a smoother upgrade path. Here are the specs of my iMac: 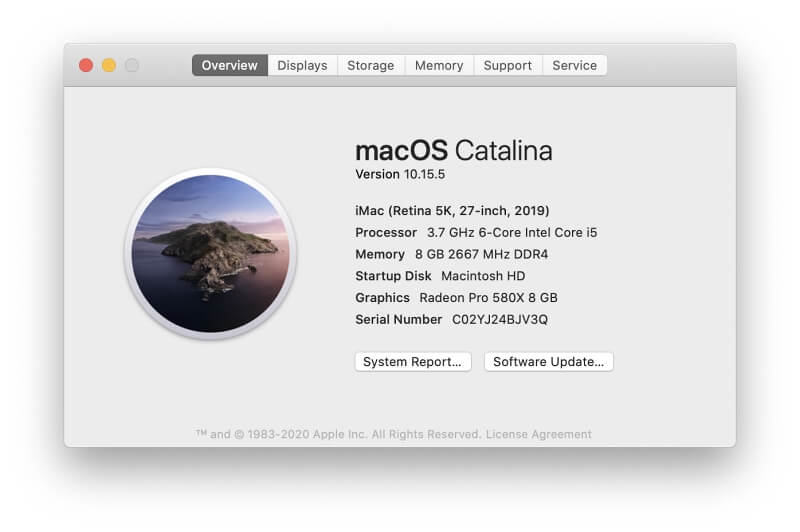 I ensured my backup was current, signed up for the beta, and ran through some troubleshooting steps before the Big Sur beta was offered. I set aside plenty of time to install it, and recommend you do the same—expect it to take hours. 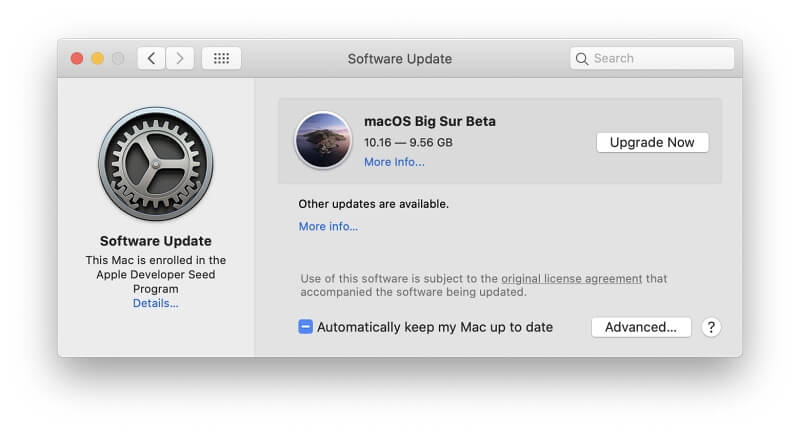 My experience installing and running Big Sur has been good. I haven’t noticed any significant speed issues on my recent model Mac. On an older machine, you may find it less snappy than you’d like. Here’s how to get Big Sur running faster.

According to 9to5 Mac, Apple has promised that software updates will install faster with Big Sur. I hoped that would apply to the initial install as well, but it doesn’t. According to Apple Support:

Updating to macOS Big Sur 11 beta from previous versions of macOS might take significantly longer than expected. Data loss could occur if the update is interrupted.

That doesn’t mean the installation will be unacceptably slow. On my computer, the entire process of downloading and installing Big Sur took an hour and a half. That’s 50% longer than it took to install Catalina last year but quicker than Mojave the year before.

I recorded the times it took to install the new beta version of macOS over the last few years. Each install was done on a different computer, so we can’t directly compare each result, but it might give you an idea of what to expect.

Obviously, your mileage may vary. Here are some ways you can minimize the time it takes to install Big Sur.

1. Make Sure Your Mac Is Supported

I heard I’d be able to install Big Sur on my mid-2012 MacBook Air and hadn’t checked Apple’s official documentation before trying. What a waste of time!

Don’t make the same mistake: make sure your Mac is supported. Here’s the list of compatible computers.

Downloading Big Sur can take 20 or 30 minutes. On a slow network, it could take much longer. Some users (like this Redditor) describe the download as “really, really slow.”

How can you speed up the download? If you use a wireless connection, make sure your Mac is reasonably close to your router so you have a strong signal. If in doubt, restart your router to make sure there are no issues.

If you’re a technical user, try macadamia-scripts. Some users found downloading the update that way to be significantly faster.

3. Make Sure You Have Enough Disk Space

Do you have enough space on your hard drive to install and run Big Sur? The more free space you have, the better. Installing the update when you have too little space is a waste of time.

How much free space do you need? One user on Reddit tried to install the beta with 18 GB free, which wasn’t enough. The update said that he needed an additional 33 GB. Other users had similar experiences. I recommend you have at least 50 GB free before trying to upgrade. Here are ways to free up storage on your internal drive. 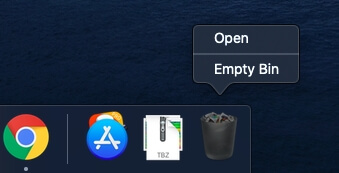 Uninstall unused applications. Click on the Applications folder in Finder and drag any apps you no longer need to the Trash. Don’t forget to empty it afterward. 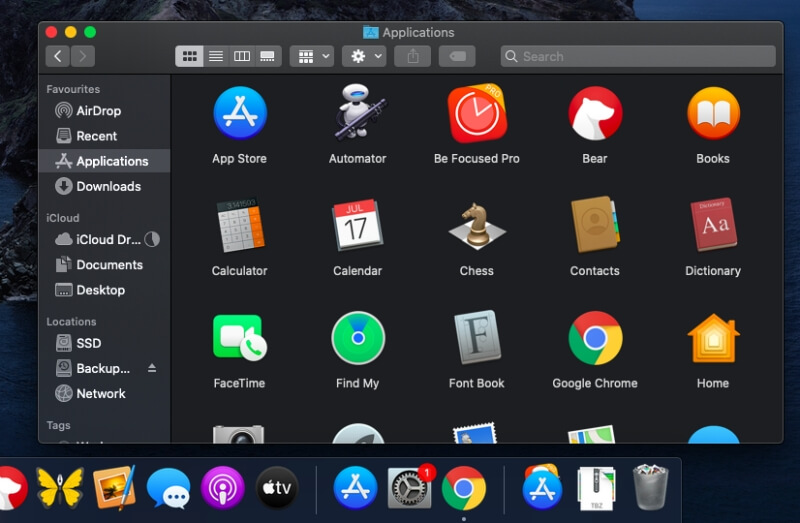 Optimize your storage. The Storage tab of About This Mac (found on the Apple menu) provides a range of utilities that free up space. 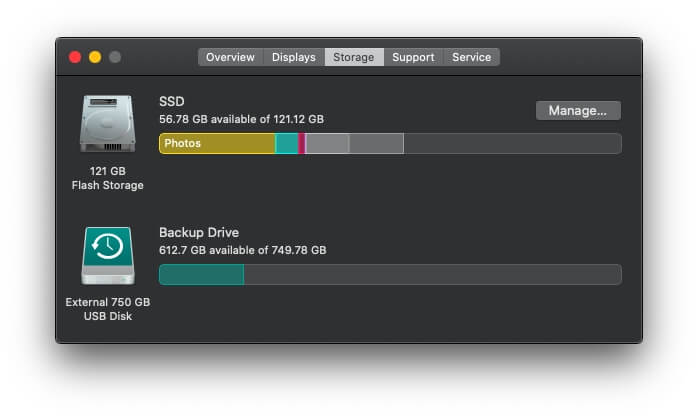 Click on the Manage button. You’ll see these options: 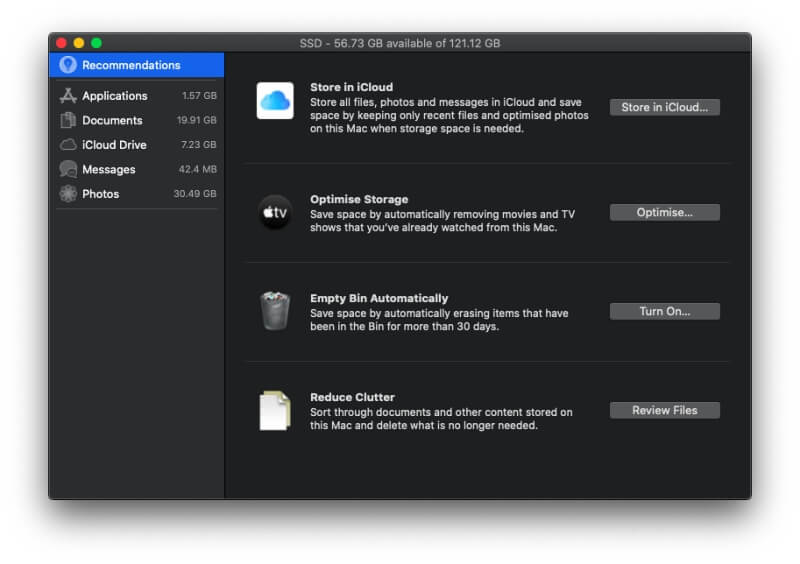 Clean up your drive. Third-party apps like CleanMyMac X can delete system and application junk files. Others like Gemini 2 can free up further space by identifying large duplicate files you don’t need. Learn about the best free Mac cleaner software in our roundup.

4. When Activation Lock Won’t Let You Access Your Mac

Activation Lock is a security feature that allows you to deactivate and erase your Mac if it’s stolen. It uses the T2 Security Chip found on recent Macs along with your Apple ID. Some users on the Apple and MacRumors forums have reported being locked out of their Macs after installing Big Sur with the following message:

Activation Lock status could not be determined because the activation lock server cannot be reached.

The problem mainly seems to happen with 2019 and 2020 Macs that were purchased second hand or refurbished from Apple. Unfortunately, there doesn’t seem to be an easy fix, and your Mac could be rendered unusable for a long time—days, not hours.

Users had to contact Apple support with proof of purchase. Even then, Apple wasn’t always able to help. If you didn’t buy your Mac new, I recommend you don’t install the beta and wait for a resolution. If you’ve already tried and are experiencing this problem, I encourage you to immediately contact Apple Support.

Hopefully, the problem will be solved with future versions of the Big Sur install. To quote one frustrated refurbished Mac owner, “This is a huge issue and needs to be addressed!”

I hate waiting for a computer to start up. I’ve heard of people who need to leave their desks and make a cup of coffee as a coping mechanism after turning their Mac on. If you have an older Mac, installing Big Sur could slow your startup time further. Here are some ways you can speed it up.

You may be waiting for apps that automatically start each time you log in. Do they all really need to launch every time you start your computer? You won’t wait as long if you autostart as few apps as possible.

Open System Preferences and choose Users & Groups. On the Logins Items tab, I notice quite a few apps that I didn’t realize have been auto-starting. To remove an app, click on it, then click the “-” (minus) button at the bottom of the list. 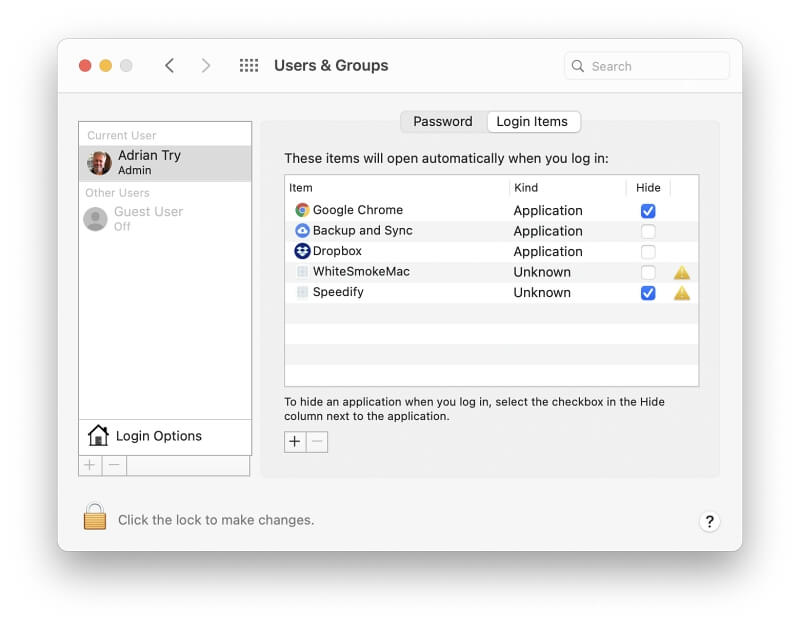 Other apps may auto-start that aren’t on that list, including launch agents—small apps that broaden the functionality of larger apps. To remove them, you’ll need to use a cleanup utility like CleanMyMac. Here are the launch agents I found when cleaning up my MacBook Air a few years ago. 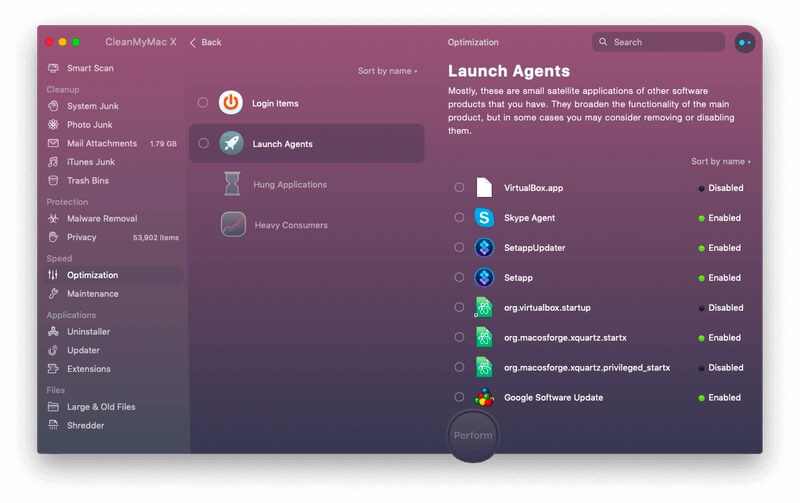 NVRAM is non-volatile RAM that your Mac accesses before it boots. It’s also where macOS stores many settings, including your time zone, screen resolution, and which drive to boot from. It sometimes becomes corrupted—and that can slow your boot time, or even prevent your Mac from booting.

If you suspect that it may be the cause of a slowdown on your Mac, reset it by holding down Option+Command+P+R when you start your computer. You’ll find detailed instructions on this Apple Support page.

Macs also have a system management controller (SMC) that manages battery charging, power, hibernation, LEDs, and video mode switching. Resetting the SMC can also help resolve slow boot issues. How you do that differs depending on whether or not your Mac has a T2 security chip. You’ll find instructions for both cases on Apple Support.

Once your Mac has booted and you’ve logged in, does Big Sur feel slower than Catalina or the previous version of macOS you were running? Here are a few ways to reduce the use of your system resources.

Some applications use more system resources than you’d guess. The best way to identify them is to check your Mac’s Activity Monitor. You’ll find it in the Utilities folder under Applications. 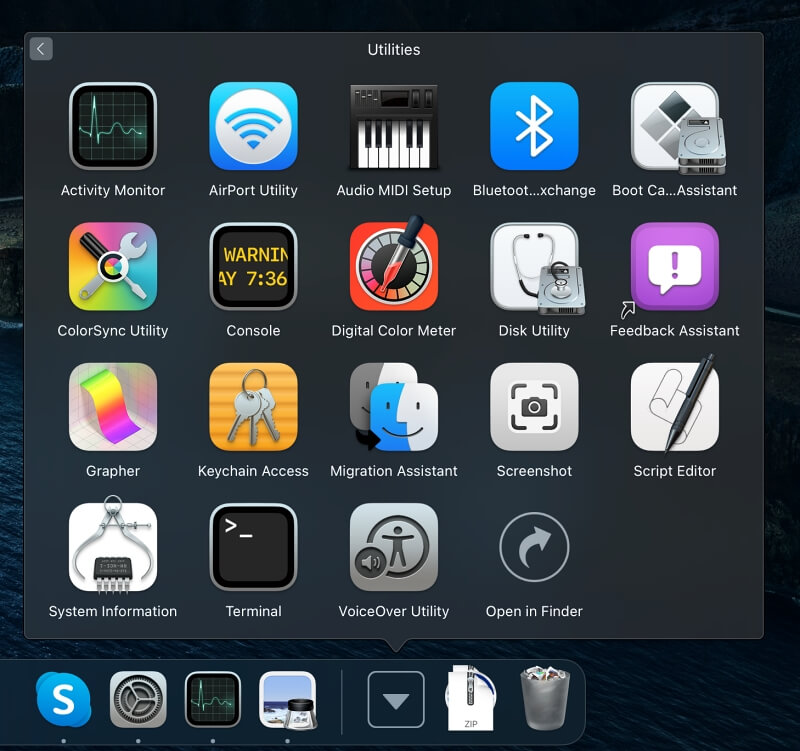 First, check which apps are hogging your CPU. When I took this screenshot, it seemed a lot of (temporary) background activity was happening with some Apple apps, including Photos. 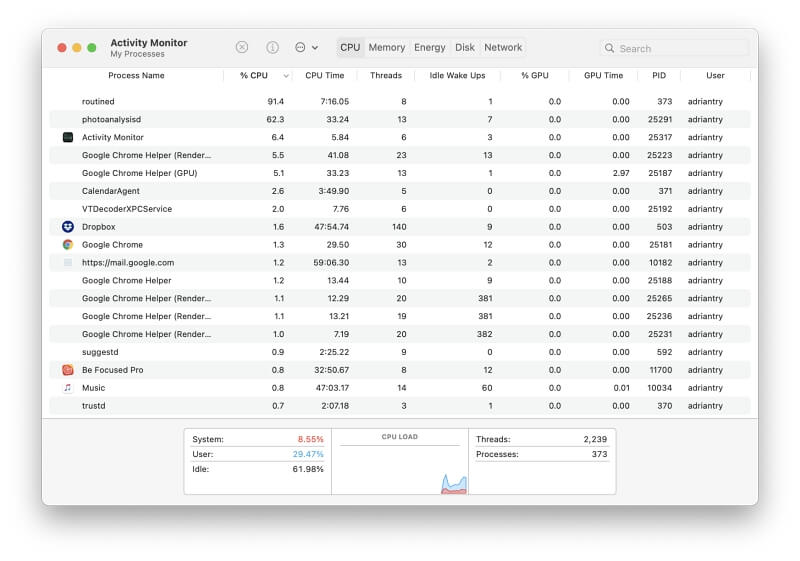 No other app stands out as concerning.ƒ If one of your apps seems to be crippling your computer, here’s what to do: check for an update, reach out to the app’s support team, or find an alternative.

The next tab allows you to check memory usage for both apps and web pages. Some web pages consume more system memory than you might think. Facebook and Gmail especially are memory hogs, so freeing up memory may be as simple as closing a few browser tabs. 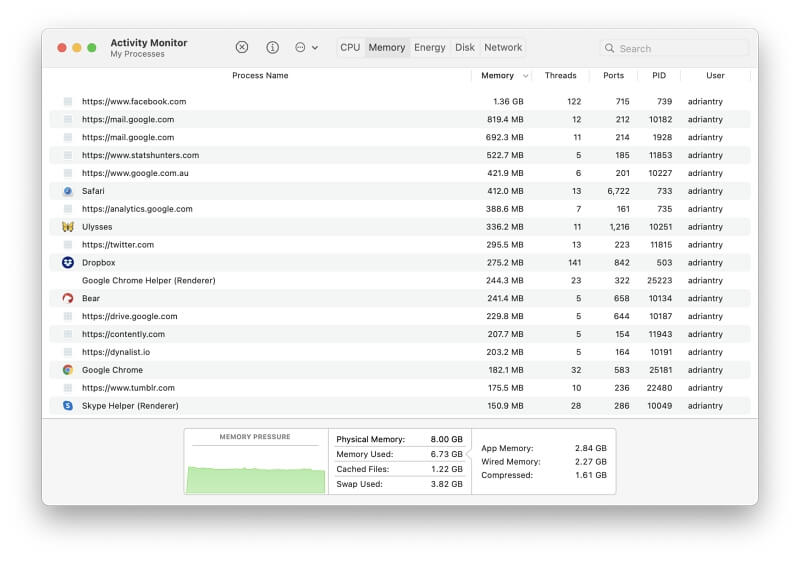 You can learn more about Activity Monitor from Apple Support.

I love the new look of Big Sur, especially the increased use of transparency. But some of the user interface’s graphical effects can significantly slow an older Mac. Disabling them will help speed things up. Here’s how to do that.

In System Settings, open Accessibility, then choose Display from the list. Reducing motion and transparency will put less of a load on your system. 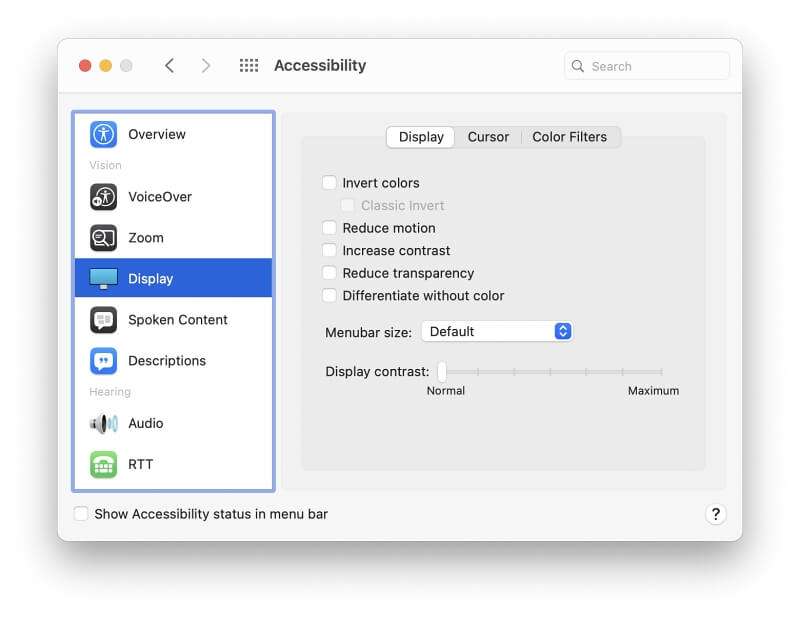 How old is your computer? Big Sur is designed for modern Macs. Does yours have what it takes? Here are some upgrade strategies that will help.

Add more memory (if possible). New Macs are sold with at least 8 GB of RAM. Does yours have that much? If you have an older computer with just 4 GB, it’s definitely worth upgrading. Depending on how you use your computer, adding more than 8 GB is likely to make a positive difference to your Mac’s performance. Several years ago, I upgraded an old iMac from 4 GB to 12. The difference in performance was astounding.

Unfortunately, not all Mac models can be upgraded because the RAM is soldered to the motherboard. This is especially true on more recent Macs. Here’s a handy guide to whether you can increase your Mac’s RAM. (I only include Macs that can run Big Sur.)

Upgrade your hard drive to an SSD. If your internal drive is a spinning hard disk, upgrading to a solid-state drive (SSD) will significantly improve your Mac’s performance. How much difference will it make? Here are some estimates from Experimax:

Unfortunately, as with RAM, many Macs won’t allow you to upgrade. Here’s a guide to whether you can improve the storage in your Big Sur-compatible Mac.

Buy a new computer. How old is your current Mac? How well does it actually run Big Sur? Maybe it’s time for a new one?

That’s the conclusion I came to when I discovered that my MacBook Air isn’t supported by Big Sur. But even if it could, it was probably time. Eight years is a long time to use any computer, and I certainly got my money’s worth.

What about you? Is it time to get a new one? You may benefit from one of our guides: