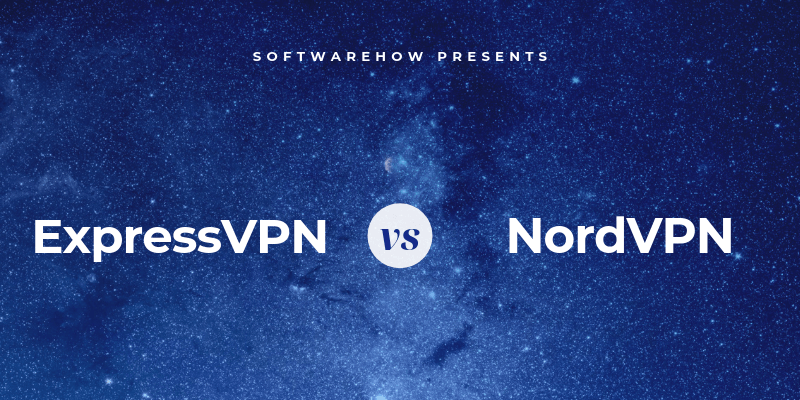 A VPN (Virtual Private Network) can effectively protect you from malware, ad tracking, hackers, spies, and censorship. If you have to swim with sharks, use a cage! That cage will cost you an ongoing subscription, and there are quite a few options out there, each with varying costs, features and interfaces. Before making a decision, take the time to consider your options and weigh up which will best suit you in the long-term.

ExpressVPN is a VPN with a great reputation, fast speed, easy interface, and high price point. Protecting your computer is as simple as flipping a switch, and you can have that switch flipped on automatically every time you start your computer. All of that makes it a good choice for those who haven’t used a VPN before, and those who want a set and forget solution. You can read our in-depth review of ExpressVPN here.

NordVPN offers a wider selection of servers around the world, and the app’s interface is a map of where they are all located. You protect your computer by clicking on the specific location in the world you want to connect to. Nord focuses on functionality over ease-of-use, and while that adds a little complexity, I still found the app quite straightforward. For a closer look at NordVPN, read our full review here.

Many computer users feel increasingly vulnerable when using the internet, and they’re right. Your IP address and system information are sent along with each packet as you connect to websites and send and receive data. That’s not very private and allows your ISP, the websites you visit, advertisers, hackers, and governments can keep a log of your online activity.

A VPN can stop unwanted attention by making you anonymous. It trades your IP address for that of the server you connect to, and that can be anywhere in the world. You effectively hide your identity behind the network and become untraceable. At least in theory.
What’s the problem? Your activity isn’t hidden from your VPN provider. So you need to choose someone you can trust: a provider that cares as much about your privacy as you do.

Both ExpressVPN and NordVPN have excellent privacy policies and a “no logs” policy. That means they don’t log the sites you visit and keep minimal logs of when you connect to their service. They keep as little personal information about you as possible (If I had to make a call, I’d say Nord collects slightly less), and both allow you to pay by Bitcoin so even your financial transactions won’t lead back to you.

In January 2017, the effectiveness of ExpressVPN’s privacy practices was tested. Authorities seized their server in Turkey in an attempt to uncover information about a murder. It was a waste of time: they discovered nothing. That’s a useful verification that what they’re doing is effective, and I imagine the result would have been just as positive if it were a Nord server.

Winner: Tie. NordVPN keeps slightly less information about you, but when it came to the crunch, officials were unable to find any personal information on ExpressVPN’s servers. You’re equally safe using either.

VPNs can defend against this type of attack by creating a secure, encrypted tunnel between your computer and the VPN server. The hacker can still log your traffic, but because it’s strongly encrypted, it’s totally useless to them. 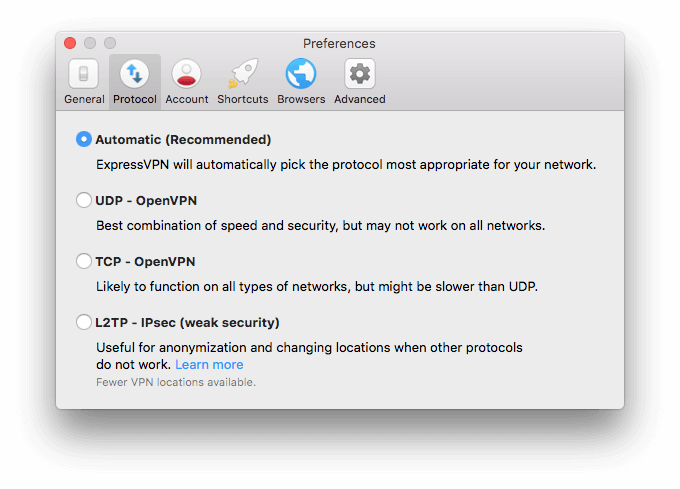 Either way, your security is significantly enhanced, but at the expense of performance, which we’ll look at later in the review. For additional security, Nord offers Double VPN, where your traffic will pass through two servers, getting twice the encryption for double the security. But this comes at an even greater expense of performance. 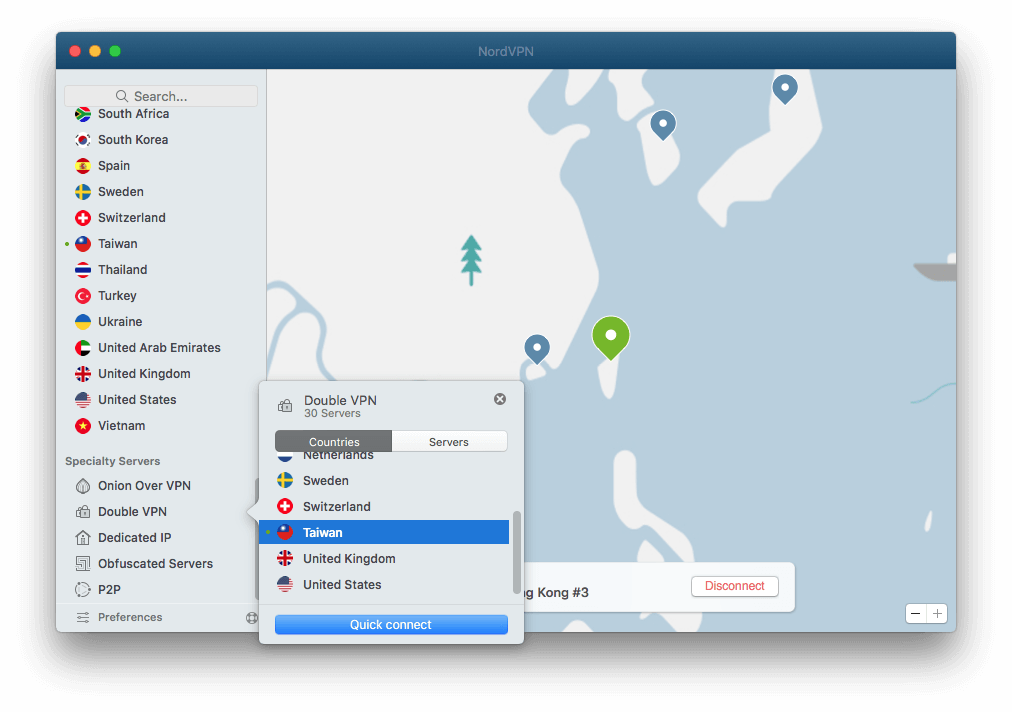 If you become unexpectedly disconnected from your VPN, your traffic will no longer be encrypted, and is vulnerable. To protect you from this happening, both apps provide a kill switch to block all internet traffic until the VPN is active again.

Finally, Nord offers a security feature that ExpressVPN doesn’t: a malware blocker. CyberSec blocks suspicious websites to protect you from malware, advertisers, and other threats. 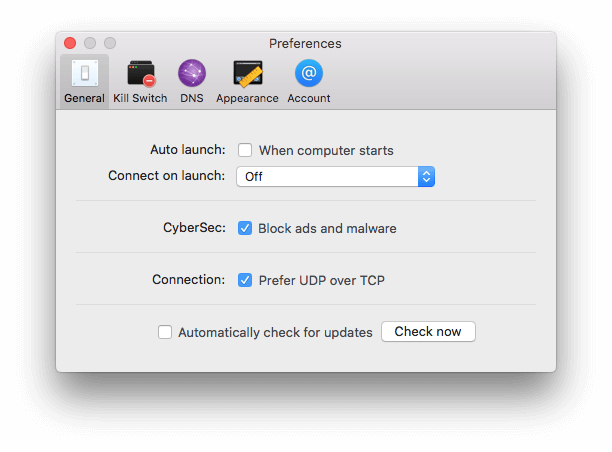 Winner: NordVPN. Either provider offers sufficient security for most users, but if you sometimes require an additional level of security, Nord’s Double VPN is worth considering, and their CyberSec malware blocker is a welcome feature.

Netflix, BBC iPlayer and other streaming service use the geographic location of your IP address to decide which shows you can and can’t watch. Because a VPN can make it appear that you’re in a country you’re not, they now block VPNs as well. Or they try to.

In my experience, VPNs have wildly varying success in streaming online content, and Nord is one of the best. When I tried nine different Nord servers around the world, each one successfully connected to Netflix. It’s the only service I tried that achieved a 100% success rate, though I can’t guarantee you’ll never find a server that fails.

On the other hand, I found it much harder to stream from Netflix using ExpressVPN. I tried twelve servers in total, and only four worked. Netflix somehow worked out that I was using a VPN most of the time, and blocked me. You may have more luck, but based on my experience, I expect you’ll have a much easier time with NordVPN.

But that’s just Netflix. There’s no guarantee you’ll get the same results when connecting to other streaming services. For example, I was always successful when connecting to BBC iPlayer with both ExpressVPN and NordVPN, while other VPNs I tried never worked. Check our Best VPN for Netflix review for more details.

Nord offers a larger number of servers to connect to (over 5,000 in 60 countries) and includes a feature called SmartPlay, designed to give you effortless access to 400 streaming services. Perhaps that explains the service’s success in streaming from Netflix.

But the competition isn’t entirely one-sided. Unlike Nord, ExpressVPN offers split tunneling, allowing you to choose which traffic goes through the VPN and which doesn’t. And they built a speed test feature into their app so you can determine (and favorite) the fastest servers quickly and easily. 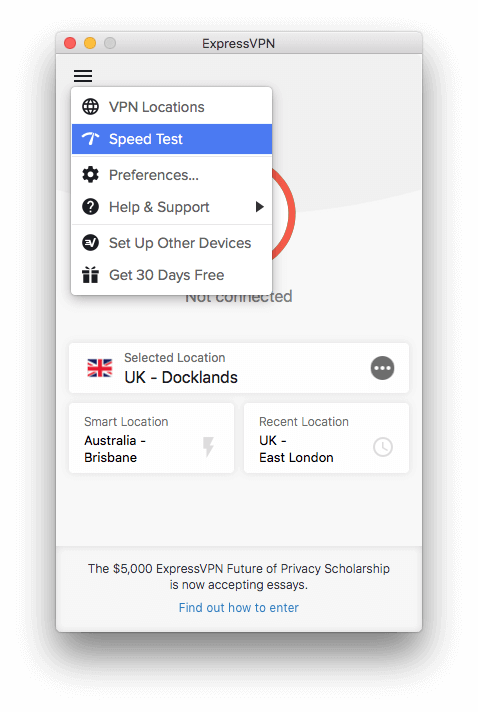 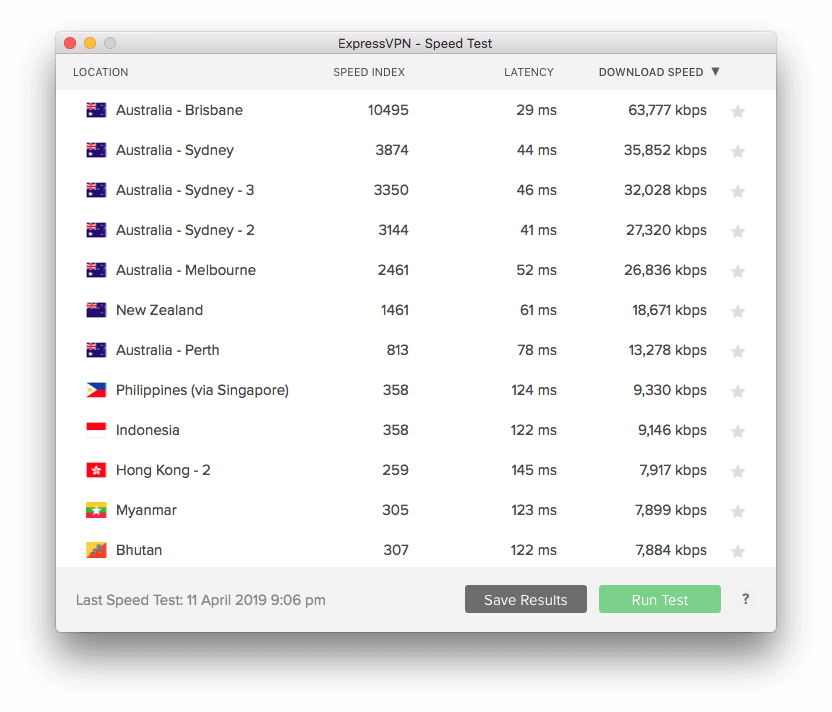 I wish Nord had this feature. With 5,000 servers of varying speeds, it can take a few tries to find a fast one. On the other hand, testing the speed of 5,000 servers may take too long to be practical.

Winner: Both applications contain features the other doesn’t, but if you’re looking for the one with the most functionality, NordVPN wins.

If you’re new to VPNs and want the simplest interface, ExpressVPN may suit you. Their main interface is a simple on/off switch, and that’s hard to get wrong. When the switch is off, you’re unprotected. 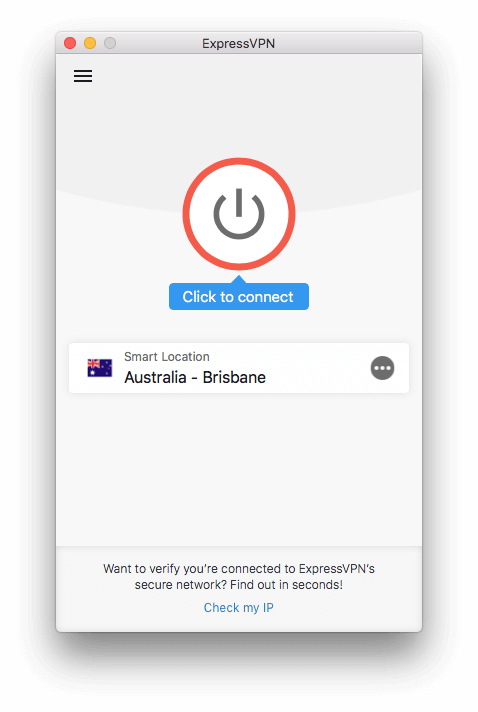 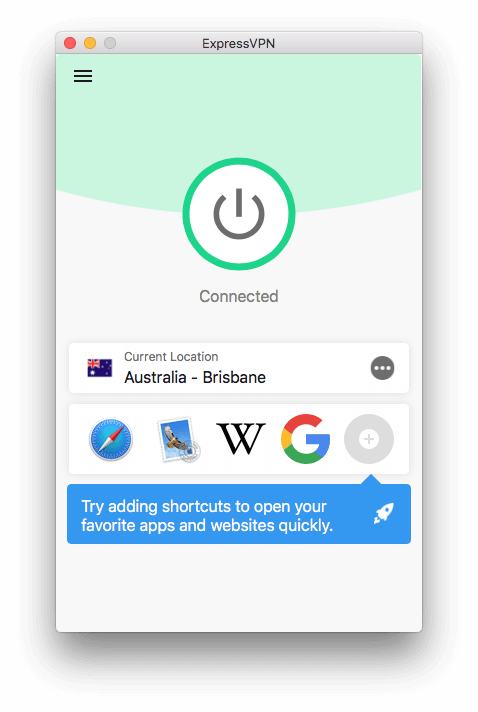 To change servers, just click on the current location and choose a new one. 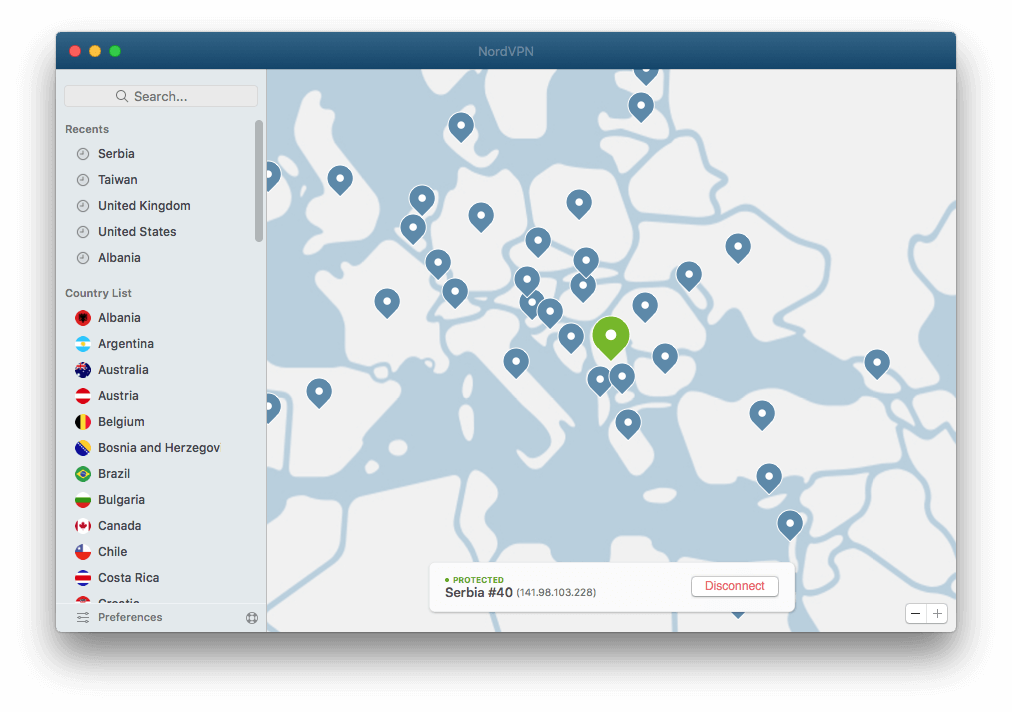 Winner: ExpressVPN is the easier to use of the two applications, but achieves this in part by offering fewer features. If the extra features are valuable to you, you won’t find NordVPN much harder to use.

Both services are quite fast, but I give the edge to Nord. The fastest Nord server I encountered had a download bandwidth of 70.22 Mbps, only 10% slower than my normal (unprotected) speed. But I found their server speeds did vary considerably, and the average speed was just 22.75 Mbps. So you may have to try a few servers before you find one you’re happy with. 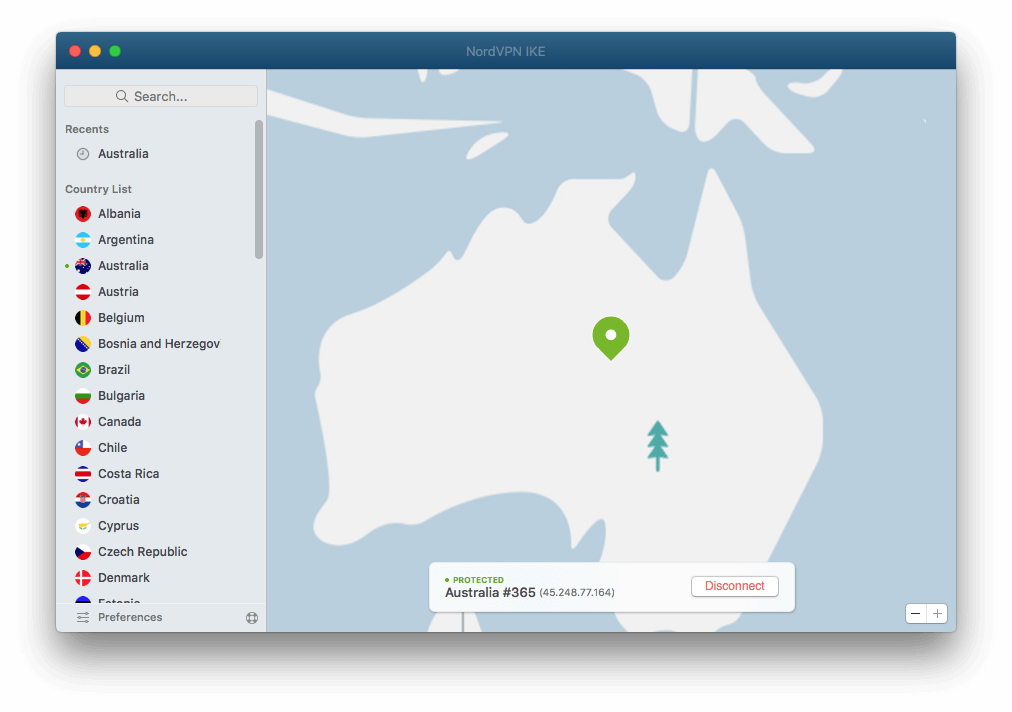 ExpressVPN’s download speeds are a little faster than NordVPN on average (24.39 Mbps). But the fastest server I could find could download at only 42.85 Mbps, which is fast enough for most purposes, but significantly slower than Nord’s best.

But they’re my experiences testing the services from Australia. Other reviewers found ExpressVPN to be faster than I did. So if speedy download speeds are important to you, I recommend trying both services and running your own speed tests.

Winner: Both services have acceptable download speeds for most purposes, and ExpressVPN is a little faster on average. But I was able to find significantly faster servers with NordVPN.

NordVPN is a less expensive service. Their monthly subscription price is a little cheaper at $11.95, and this is discounted to $6.99 a month if you pay yearly. But unlike ExpressVPN, Nord rewards you for paying several years in advance. Their 2-year plan costs just $3.99 a month, and their 3-year plan a very affordable $2.99/month.

Nord wants a long-term commitment from you and will reward you for it. And if you’re serious about your online security you’ll be using a VPN long-term anyway. With Nord, you pay less money for more features, potentially faster download speeds, and better Netflix connectivity.

Why would you pay more money for ExpressVPN? Ease-of-use and consistency are the biggest two benefits. Their app is simple, and server speeds are more consistent. They offer a speed test feature so you know which servers are the fastest before you connect to them, and other reviewers have found ExpressVPN’s server speeds faster than I did.

For those of you looking to use a VPN for the first time or prefer the easiest-to-use interface, I recommend ExpressVPN. Unless you pay for multiple years, it doesn’t cost that much more than Nord, and it offers you a friction-free introduction to the benefits of VPNs.

But the rest of you will find NordVPN to be the better solution. If you’re committed to VPN usage, you won’t mind paying for a few years in advance to get one of the cheapest rates on the market—the second and third years are surprisingly inexpensive.

NordVPN offers the best Netflix connectivity of any VPN I tested (read the full review here), some very fast servers (though you may have to try a few before you find one), more features, and superior security. I highly recommend it.

If you’re still not sure which to choose, take them both for a test drive. While neither company offers a free trial period, they both stand behind their service with a 30-day money back guarantee. Subscribe to both, evaluate each app, run your own speed tests, and try connecting to the streaming services most important to you. See for yourself which one best meets your needs.