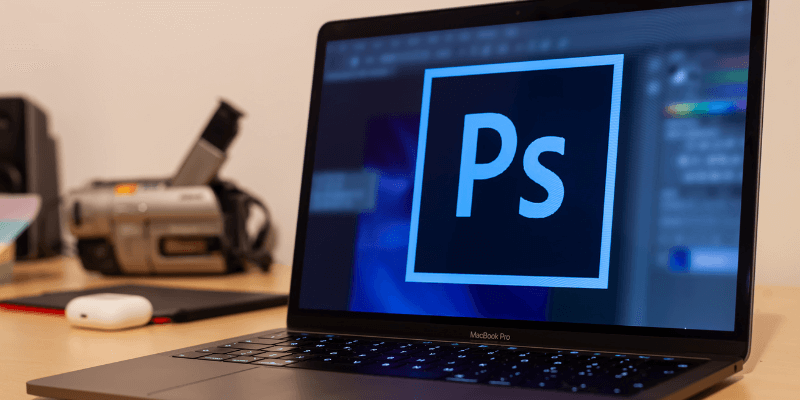 Very few pieces of software have been so successful that their names become verbs. Although Photoshop has been around since 1990, it’s only since the age of viral memes that people began using ‘photoshop’ to mean ‘edit a picture.’ While Photoshop earned this honor by being the best, it’s not the only quality photo editor out there.

Adobe recently angered many Photoshop users by switching to a subscription pricing model. When that happened, the search for alternative software options really kicked off. A number of different programs compete for the crown of ‘best Photoshop alternative,’ and we’ve selected six of the best: three paid options, and three free options.

Because Photoshop has a massive feature set, it can be hard to choose a single program as a replacement. Some, like vector drawing, 3D model rendering, or video editing, rarely get used because they’re better when handled by a program dedicated to those tasks. Today, we’re going to focus on Adobe Photoshop alternatives that specialize in the most crucial area: photo editing!

Affinity Photo was one of the first photo editors to market itself as an alternative to Photoshop’s subscription model. Released in 2015 exclusively for macOS, Affinity Photo quickly received acclaim from both Apple and photographers alike and was named Mac App of the Year. A Windows version followed shortly after, and Affinity Photo has been gaining ground ever since. 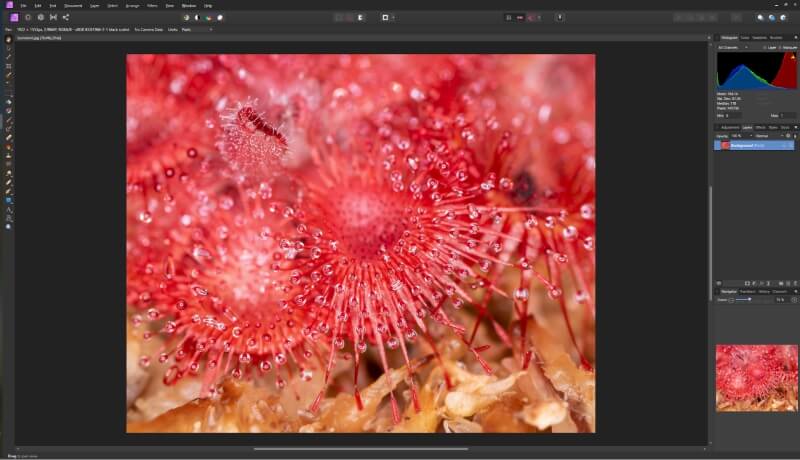 Most of the editing tools feel snappy and responsive, although the Liquify persona does lag a bit during the drawing process, even on my high-powered PC. This delay can make it a bit frustrating to use, but it’s often better to use additional, shorter “brush” strokes when doing liquify edits anyway.

Affinity Photo may not be a perfect replacement for Photoshop, but it does a great job with most editing tasks. It doesn’t offer some of the more advanced Photoshop features like content-aware fill, but to the best of my knowledge, only one of the other competitors offers a similar feature so far.

With an initial release date of August 1990, Paintshop Pro is only about six months younger than Photoshop. Despite being roughly the same age and having virtually identical capabilities, Paintshop Pro has never quite taken hold the way that Photoshop has. This may be just because it’s only available for Windows, and much of the creative community is committed to macOS.

But whatever the reason, Paintshop Pro is an excellent alternative to Photoshop if you’re using a PC. You may be able to get it to work on a Mac using Parallels, but that workaround isn’t officially supported by Corel, and there are no plans for developing a native Mac version. 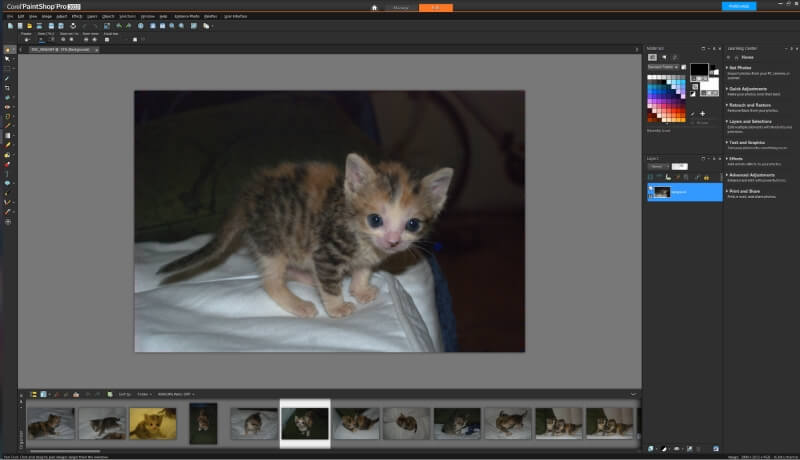 Paintshop Pro provides virtually all of the photo editing features you can find in Photoshop. The latest release has even added some fancy new options, like content-aware fills and clone stamps, that automatically create new content in a cloned background based on existing image data. The tools are excellent, and the entire editing process feels responsive, even when working with large files.

Corel also bundles in several other pieces of software with a Paintshop Pro purchase, including the Essentials version of their fantastic Painter software. Read our full review for more.

If you want to stick with Adobe’s but dislike their subscription model, Photoshop Elements might solve your problem. It’s available as a standalone one-time purchase, and it includes most of the photo editing functionality that you get from its older sibling.

Photoshop Elements has a number of different modes, from Guided mode, which provides step-by-step instructions for editing tasks, to the Expert mode, which offers an expanded toolset covering almost everything you’ll need for casually retouching photos. While it’s a great program, it’s not really up to a professional-level workflow. 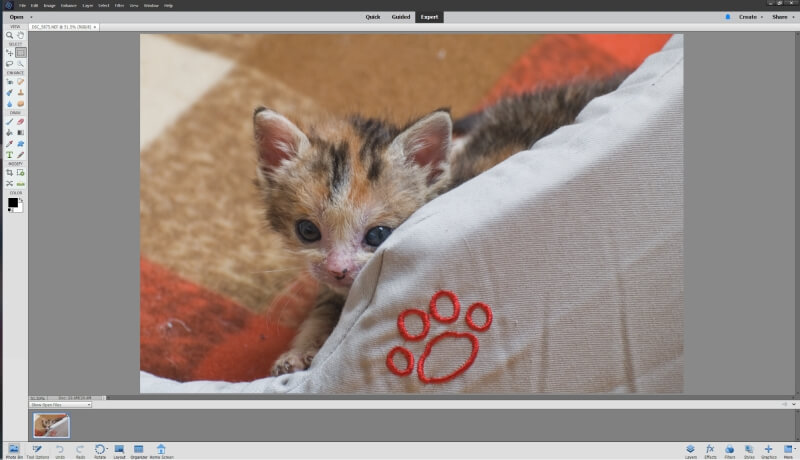 The newest version offers some expanded editing features courtesy of Sensei, Adobe’s machine learning project. As Adobe says, “Adobe Sensei is the technology that powers intelligent features across all Adobe products to dramatically improve the design and delivery of digital experiences, using artificial intelligence and machine learning in a common framework.”

In normal human language to us non-marketing types, this means that it’s possible to apply all kinds of creative effects to your photos with a single click, leaving Adobe Sensei to do all the work. It can create selections, handle clone stamping, and even colorize black and white photos, although I haven’t had a chance to test these features yet for myself.

Read our full review of Photoshop Elements for more.

GIMP stands for GNU Image Manipulation Program. It refers to the free software project, not the antelope from the Serengeti plains. I’ve dismissed GIMP for a long time because the default interface was impossible to use, but I’m happy to report that the newest version has finally fixed that major problem. This has really unleashed a lot of GIMP’s power. It was always capable, but now it’s also usable. 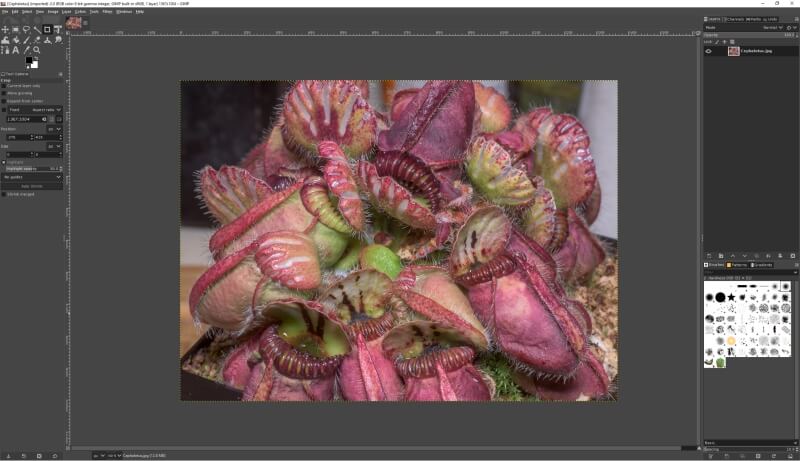 GIMP handles layer-based pixel editing flawlessly, and all edits feel snappy and responsive. The warp/liquify tool is also completely lag-free, something Affinity Photo still hasn’t quite mastered. The tools get a bit technical when you dive into more complex features, but the same is true of Photoshop.

There are none of the fancier editing features you usually find in paid programs, such as HDR image editing or content-aware fills, though it does have built-in support for pen-style drawing tablets.

If the improved default interface still doesn’t work for you, you can customize it to your heart’s content. You can even download themes created by other users. One theme looks and behaves like Photoshop, which might make the transition easier if you’re coming from a Photoshop background. Unfortunately, it looks like the theme is no longer being actively maintained, so it may not work with future versions.

If you’re a serious photographer in need of a decent replacement for Adobe Camera RAW, darktable might be just what you’re looking for. It’s geared towards RAW photo editing workflows rather than pixel-based edits, and it’s one of the few open-source photo editors to do so.

It uses the popular Lightroom-style module system, which includes \a basic library organizer, the editor itself, a map view that uses your photo GPS coordinates (if available), and a slideshow feature. It also offers a tethered shooting mode, but I haven’t been able to test that yet – and tethered shooting can be tricky to get right. 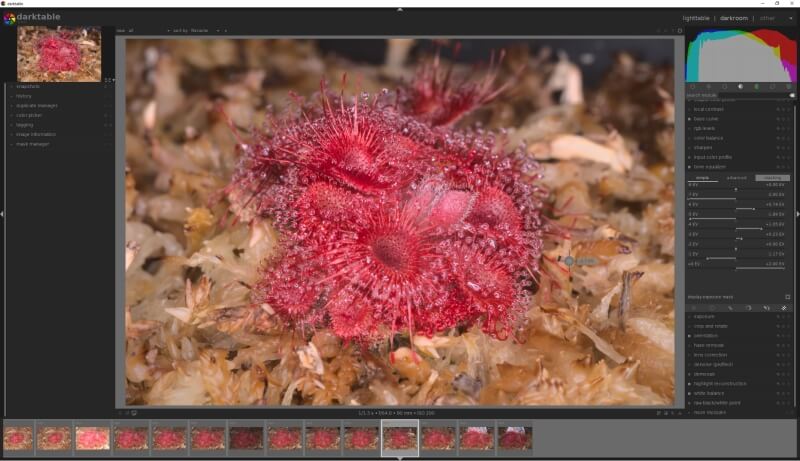 The darktable ‘darkroom’ interface (and a Drosera burmannii from my collection!)

The editing tools cover just about everything you’d want to do to a RAW image (see a full list here), including one of the most interesting non-destructive tools I’ve run across named the ‘Tone Equalizer.’ It allows you to quickly adjust the tones in various areas based on their current exposure value (EV), without messing around with points on a tone curve. This makes complex tone adjustments incredibly easy. I bet Ansel Adams would be kicking himself with jealousy.

If you need a complete photo editing workflow for the low price of free, a combination of darktable and GIMP should cover just about everything you’ll need to edit. It might not be as polished as what you’ll find in the Adobe ecosystem, but you sure can’t argue with the price.

If all you want to do is basic edits to a photo (read: make funny memes), you might not need the full power of a desktop application like GIMP or darktable. Browser apps have made incredible strides in the last few years, and now it’s possible to do many photo editing tasks entirely online. 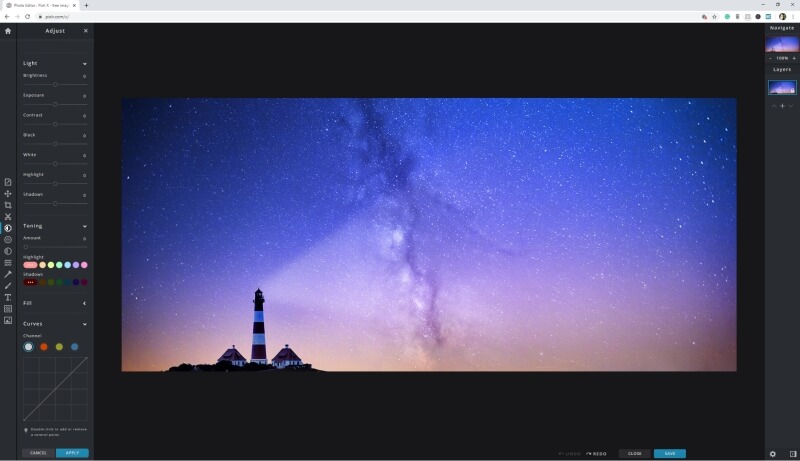 In fact, the latest version of Pixlr has almost all the tools you’ll need for working on typical screen-resolution images you see all over the web. While they don’t offer the same level of fine control you get from a desktop program, they’re more than capable of handling most editing tasks. You can even add multiple layers, text, and other elements from the Pixlr content library, although library access requires a Pro subscription.

Pixlr doesn’t accept high-resolution images. It forces you to resize them to a maximum of 4K-equivalent resolution (3840 pixels on the long side) before editing. It can’t open RAW images at all; Pixlr is geared toward more casual image work that uses the JPEG format. Of course, it won’t do you any good if your internet goes out, but it’s a great tool for making quick edits from whatever device you’re currently on.

While it’s not likely that any program will manage to unseat Photoshop as the industry standard photo editor any time soon, there are a lot of other options that deserve your attention. Whether you’re looking to avoid Adobe subscriptions or just need a program for a few quick edits, one of these great Photoshop alternatives will solve your problem.

Do you have a favorite Photoshop alternative that I didn’t mention? Let us know in the comments!