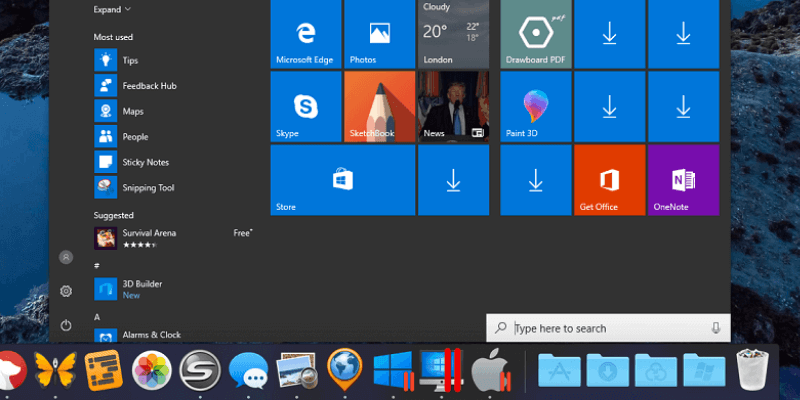 Parallels Desktop lets you run Windows apps on your Mac. That can be very handy if you rely on certain Windows apps for your business, or have switched to Mac and can’t find alternatives for everything you need.

Is it worth it? If you have Mac apps for everything you need you won’t need Parallels, and if you need just a few non-critical Windows apps a free alternative may meet your needs. But if you rely on Windows apps to get your work done, you’ll need the premium Windows performance that Parallels Desktop provides. 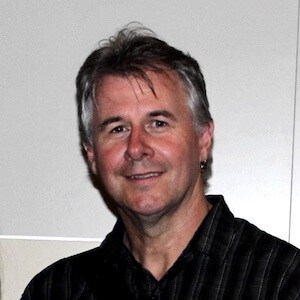 My name is Adrian Try. After using Microsoft Windows for over a decade, I made a deliberate move away from the operating system in 2003. I enjoyed the change, but still needed certain Windows apps on a regular basis. So I found myself using a combination of dual boot, virtualization (using VMware and VirtualBox) and Wine. See the Alternatives section of this Parallels Desktop review.

I hadn’t tried Parallels before. I was provided a review license and installed an earlier version on my iMac. For the last week, I’ve been putting it through its paces, installing Windows 10 (purchased just for this review) and several other operating systems, and trying just about every feature in the program. 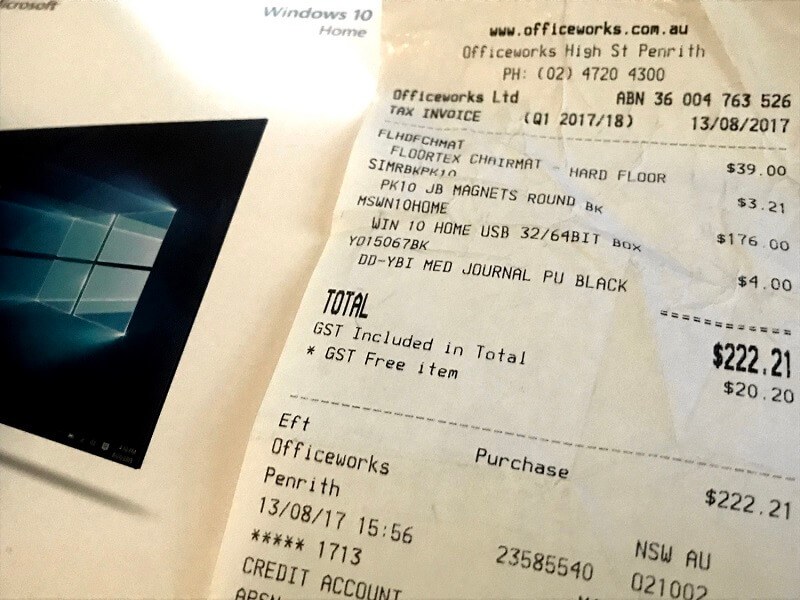 The new version was released last night, so I immediately upgraded. This review reflects my use of both versions and all of the screenshots are from version 13.

In this Parallels review, I’ll share what I like and dislike about Parallels Desktop. The content in the quick summary box above serves as a short version of my findings and conclusions. Read on for the details!

What is Parallels Desktop?

It’s an app that allows you to run Windows apps on your Mac. It does this by allowing you to install Windows on a virtual machine — a computer emulated in software. Your virtual computer is assigned a portion of the RAM, processor and disk space of your real computer, so it will be slower and have fewer resources.

Other operating systems will also run on Parallels Desktop, including Linux, Android, and macOS — even older versions of macOS and OS X (El Capitan or earlier).

Parallels has added a number of new features to version 15. According to the release notes from Parallels, those include 30+ new features such as macOS Catalina support, full Apple Pencil support in Sidecar, screenshot preview to Windows, and more.

Yes, it is. I ran and installed the app on my iMac and scanned it for viruses. Parallels Desktop doesn’t contain any virus or malicious processes.

Be aware that when you install Windows in Parallels, you become vulnerable to Windows viruses (on the virtual machine and the files it can access), so make sure you protect yourself. A trial version of Kaspersky Internet Security is included, or install your security software of choice. 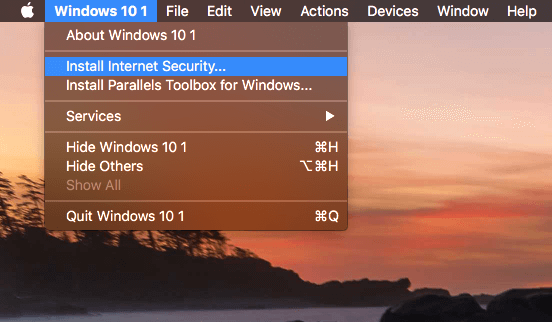 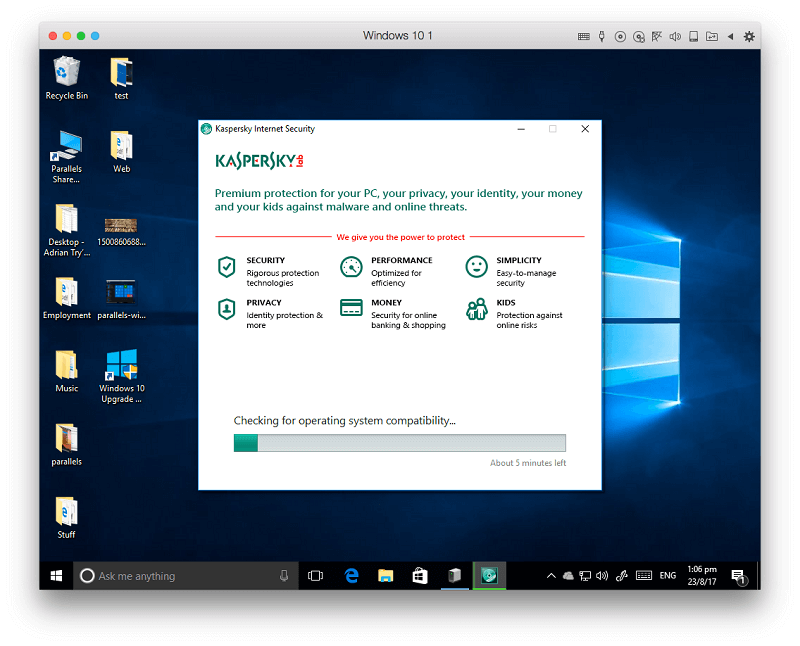 During my use of the app, my mouse froze once when switching between Windows and Mac. This required a reboot to fix. Your mileage may vary.

No, it isn’t freeware though a full-featured 14-day trial is available. There are three versions of the app to consider.

How to Install Parallels Desktop for Mac?

Here is an overview of the full process of getting the app up and running:

Parallels Desktop Review: What’s in It for You?

Since Parallels Desktop is all about running Windows apps (and more) on your Mac, I’m going to list all its features by putting them into the following five sections. In each subsection, I’ll first explore what the app offers and then share my personal take.

1. Turn Your Mac Into Several Computers with Virtualization

Parallels Desktop is virtualization software — it emulates a new computer in software. On that virtual computer you can run any operating system you like, including Windows, and any software that runs on that operating system. That’s very convenient if you need non-Mac software.

A virtual machine will run slower than your real computer, but Parallels has worked hard to optimize performance. But why run a slower virtual machine when you can install Windows on your actual computer using Bootcamp? Because having to restart your machine to change operating systems is slow, inconvenient, and incredibly frustrating. Virtualization is an excellent alternative.

2. Run Windows on Your Mac Without Rebooting

You may need to run Windows on your Mac for a variety of reasons. Here are some examples:

Parallels provides the virtual machine, you need to supply Microsoft Windows. There are three options:

Transferring a previously-installed version of Windows is the least-recommended option, as it can lead to licensing issues or driver problems. In my case, I purchased a shrink-wrapped version of Windows 10 Home (with USB an enclosed USB stick) from a store. The price was the same as downloading from Microsoft: $179 Aussie dollars. 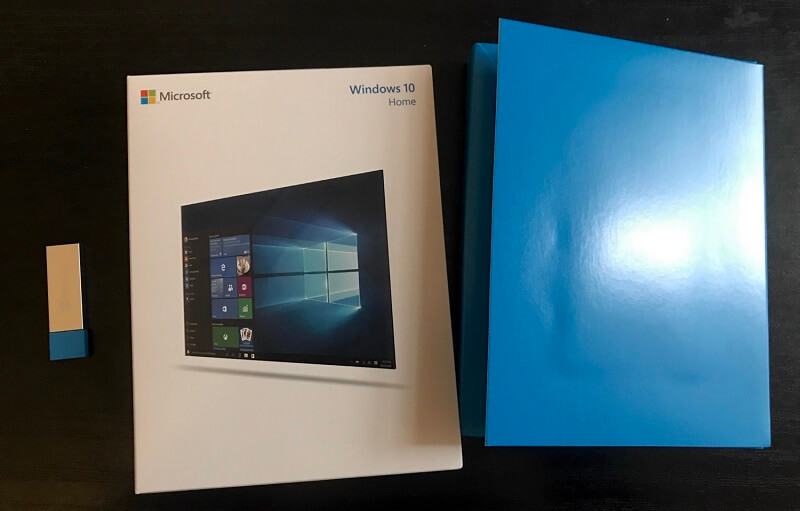 I started up Parallels Desktop, inserted my USB stick, and Windows was installed without fuss. 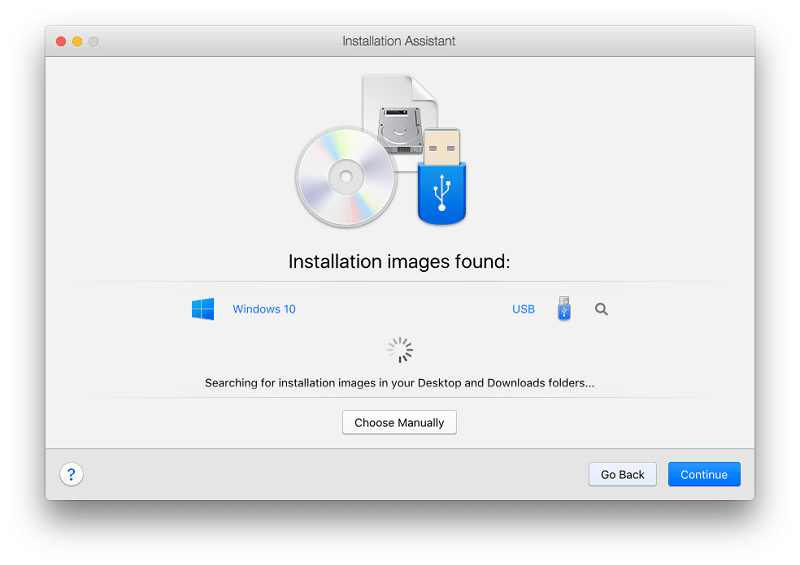 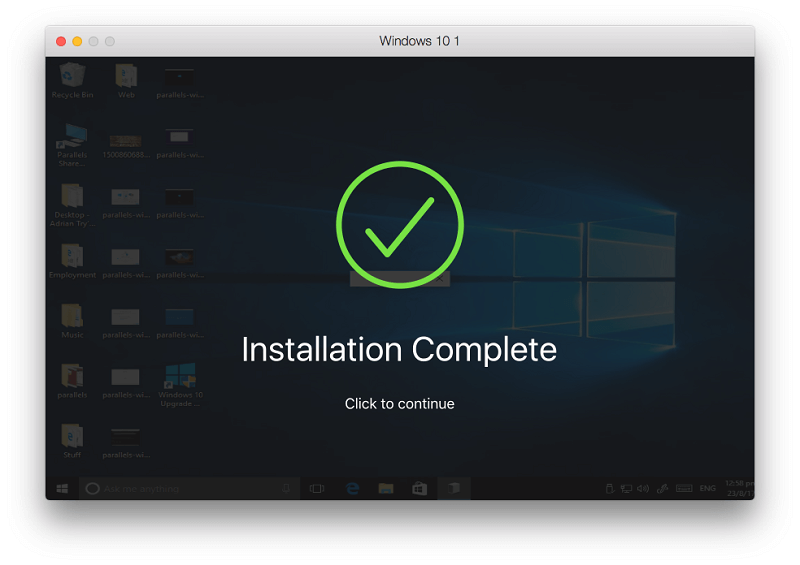 Once installed, Windows feels snappy and responsive. Moving from Windows to Mac and back again is fast and seamless. I’ll explain how that’s done in the next section.

My personal take: For those needing access to Windows while using macOS, Parallels Desktop is a godsend. They have obviously worked hard to optimize their software for Windows, as it is incredibly responsive.

3. Switch Conveniently between Mac and Windows

How easy is switching between Mac and Windows using Parallels Desktop? You don’t even notice it. By default it runs inside a window like this. 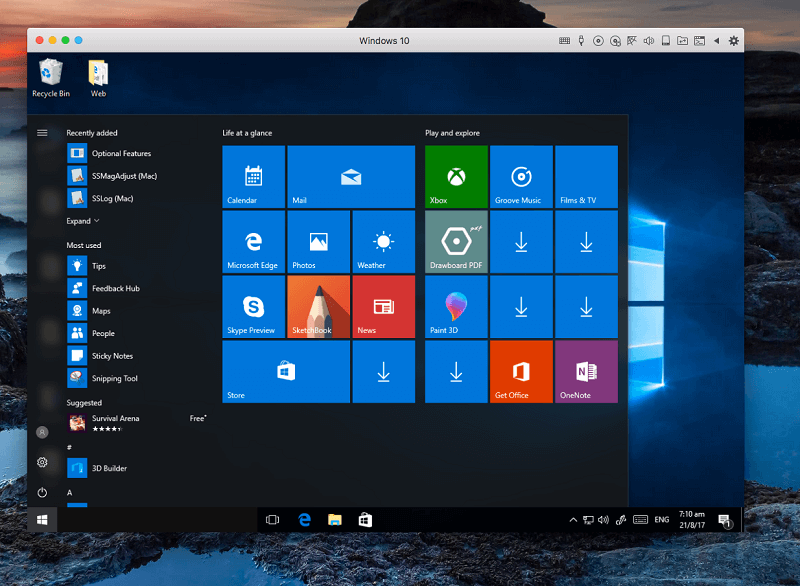 When my mouse is outside of that window, it is the black Mac mouse cursor. Once it moves inside the window, it becomes the white Windows mouse cursor automatically and instantly.

For some uses that can feel a little cramped. Pressing the green Maximize button will make Windows run full screen. The screen resolution adjusts automatically. You can switch to and from Windows using a four-finger swipe. 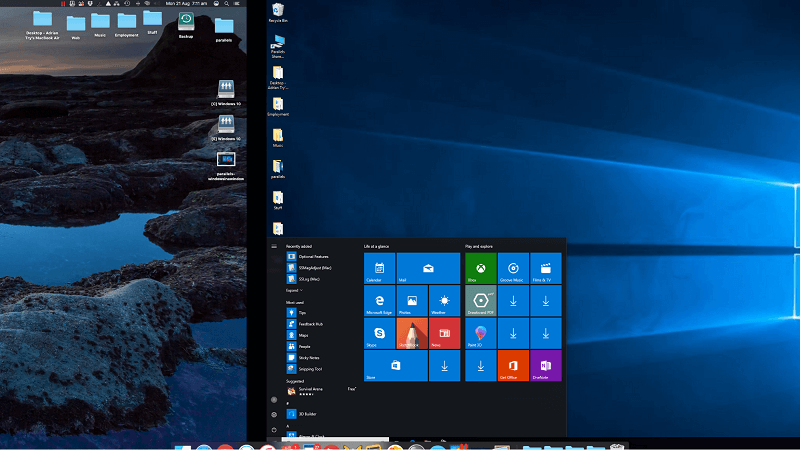 Very fast, very easy, very intuitive. Switching between Mac and Windows couldn’t be easier. Here’s another bonus. For convenience, I found myself leaving Windows open even when I wasn’t using it. When not in use, Parallels pauses the virtual machine to reduce the load on your computer. 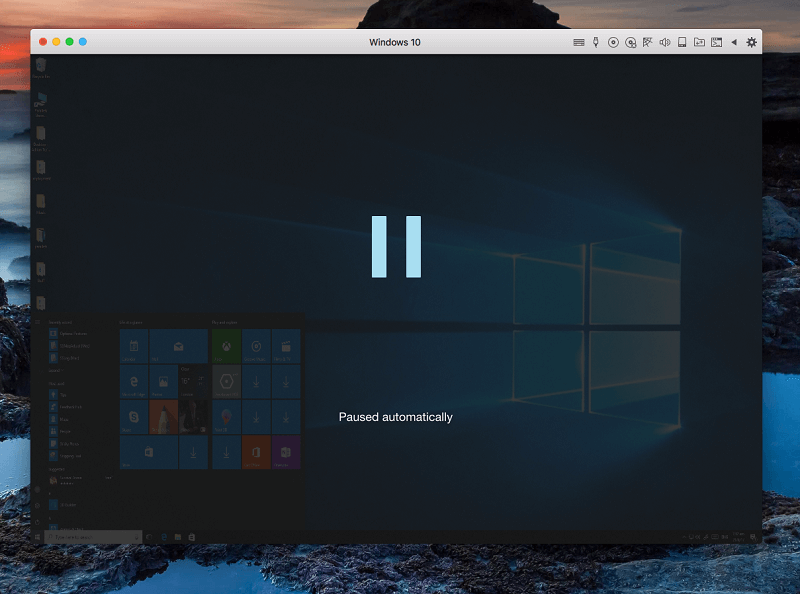 Once your mouse enters the Windows environment again, Windows is up and running again within about three seconds.

My personal take: Whether running Windows full-screen or in a window, switching to it is simple and seamless. It’s no harder than switching to a native Mac app.

4. Use Windows Apps alongside Mac Apps

When I first moved away from Windows, I found myself still relying on a few key apps. You might be the same:

It’s surprising how reliant businesses can become on out-of-date software that is no longer updated or supported. Parallels Desktop provides a Coherence Mode which lets you work with Windows apps without dealing with the Windows interface. David Ludlow sums it up: “Coherence turns your Windows apps into Mac ones.”

Coherence Mode hides the Windows interface altogether. You launch the Start Menu by clicking the Windows 10 icon on your dock. 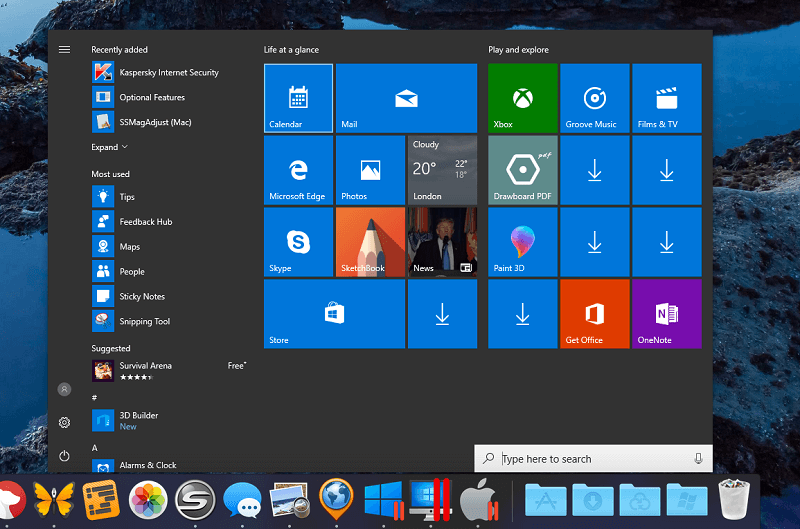 You can search for and run the Windows Paint program from Spotlight. 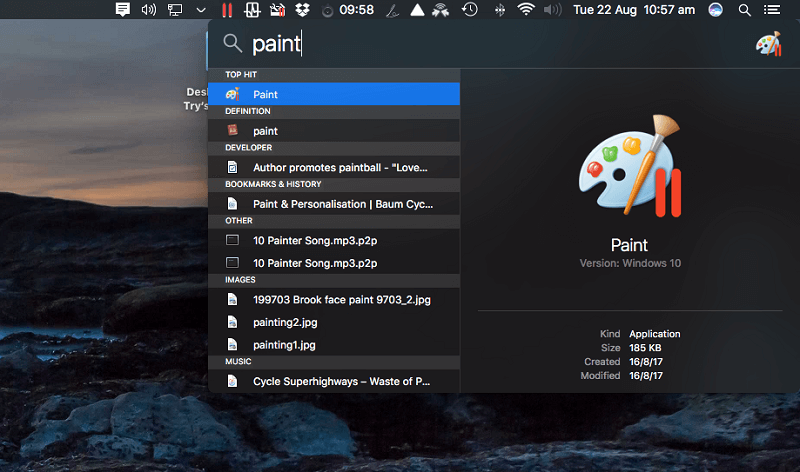 Paint runs right on your Mac desktop, no Windows in sight. 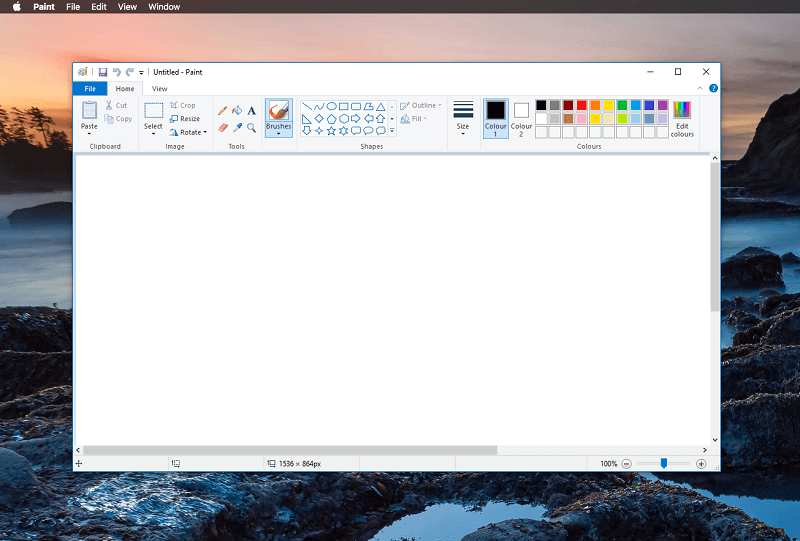 And the Mac’s right-click Open With menu even lists Windows apps. 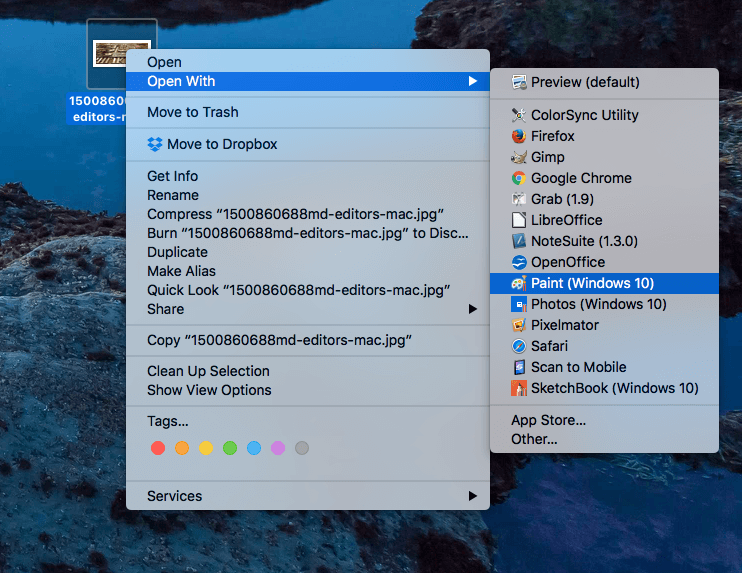 My personal take: Parallels Desktop allows you to use Windows apps almost as if they were Mac apps. You can start the apps from your Mac’s Dock, Spotlight, or a context menu.

5. Run Other Operating Systems on Your Mac

The convenience of Parallels Desktop doesn’t stop with Windows. You can run a variety of operating systems, including Linux, Android and macOS. Why would someone want to do that? Here are some examples: 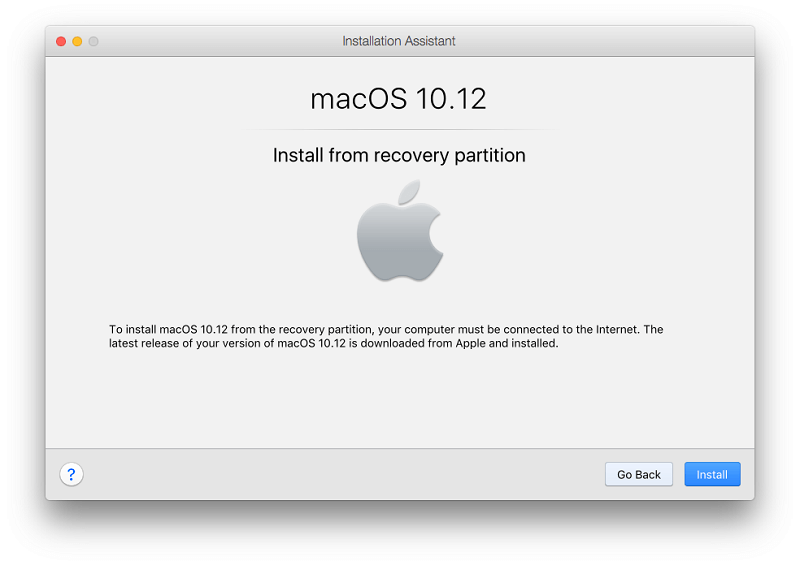 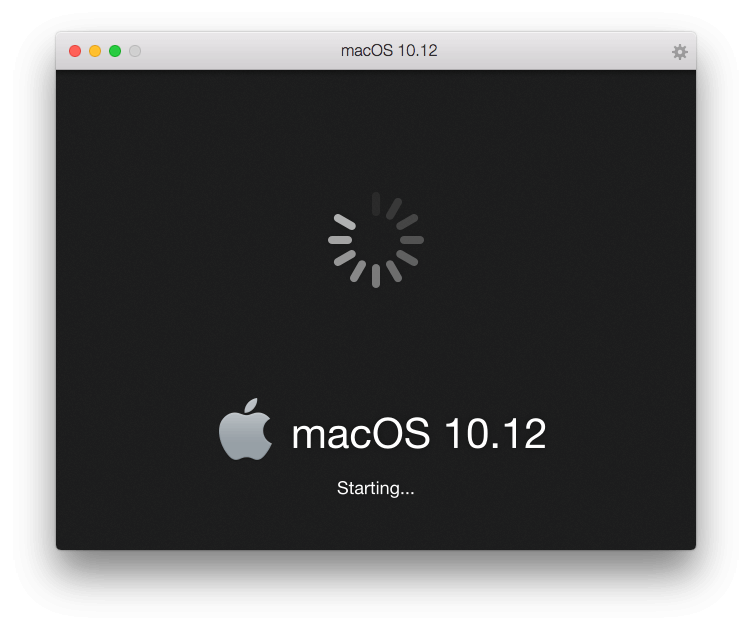 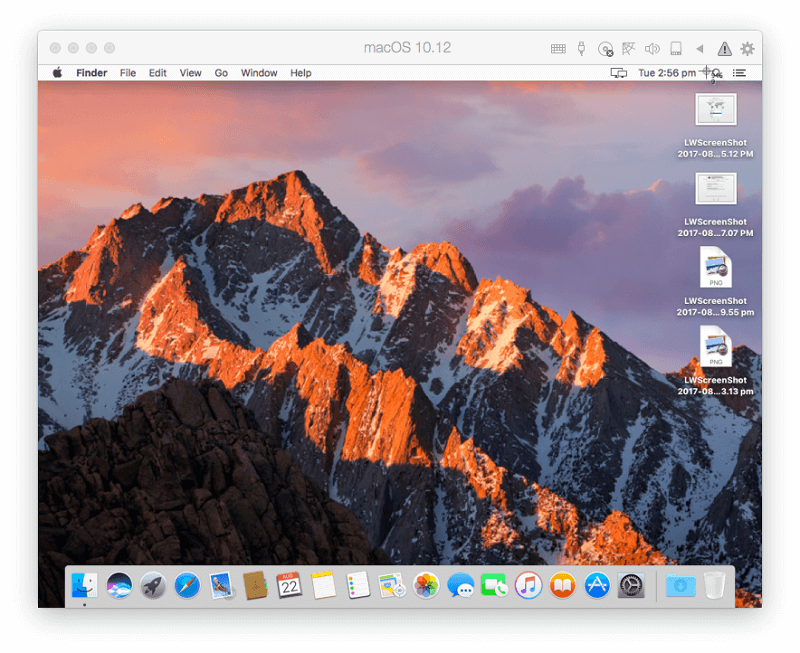 I found macOS significantly less responsive than Windows — I assume Parallel’s main priority is Windows performance. It was definitely usable, though.

Installing Linux is similar. You can either choose to have Parallels Desktop download a number of Linux distros (including Ubuntu, Fedora, CentOS, Debian and Linux Mint), or install from a disk image. 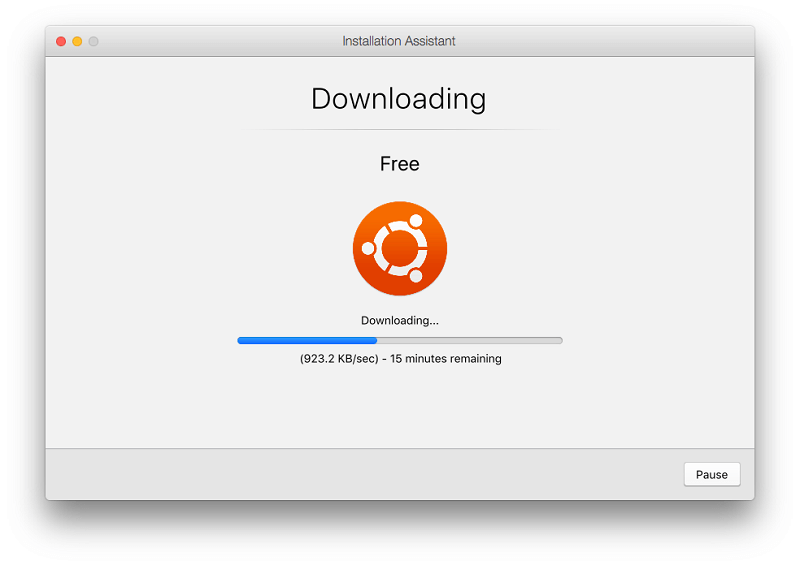 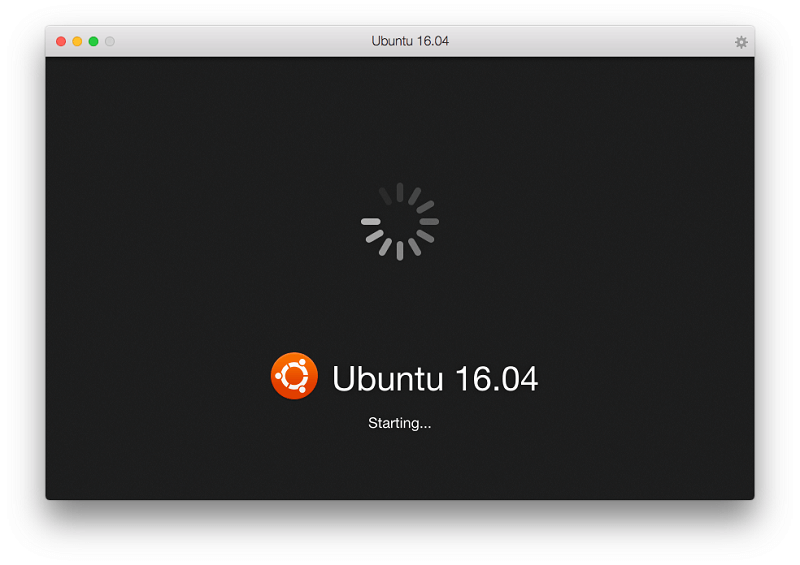 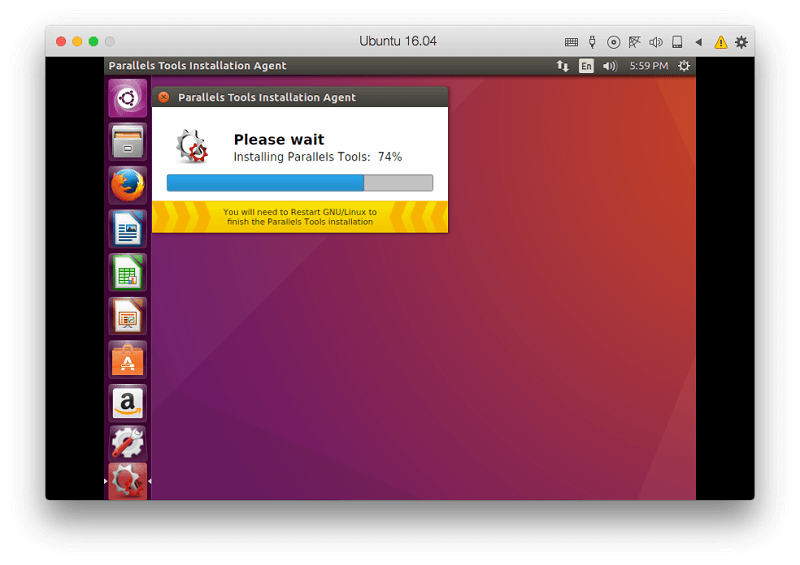 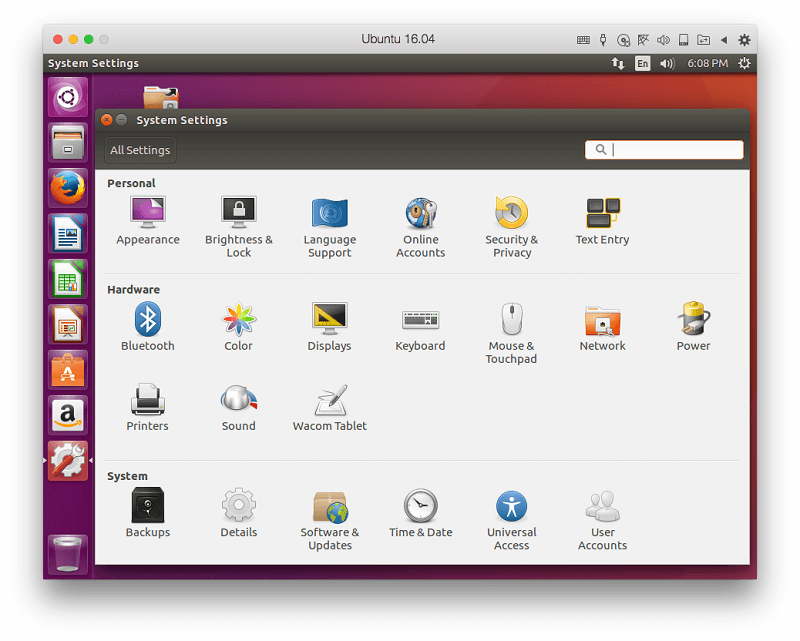 Like macOS, Linux seems less responsive than Windows. Once you have a few operating systems installed, the Parallels Desktop Control Panel is a handy way to start and stop them. 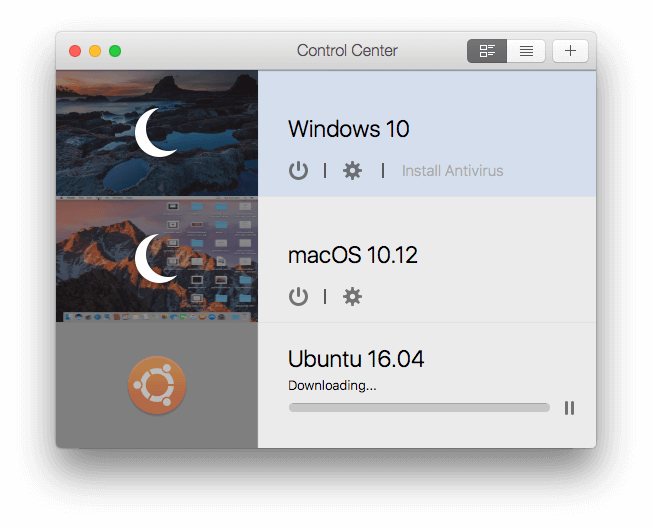 My personal take: Parallels Desktop can run macOS or Linux on a virtual machine, though not with the same speed as Windows, or with as many integration features. But the software is stable and usable all the same.

Reasons Behind My Reviews and Ratings

Parallels Desktop does exactly what it promises: it runs Windows apps alongside my Mac apps. Running Windows in a virtual machine was convenient and responsive, and allowed me to access Windows apps that I rely on. Windows paused when not in use, so unnecessary resources were not being wasted.

Although there are free virtualization options, $79.99 is a reasonable price to pay for the amount of work Parallels have put into optimizing performance and integration.

I found launching Windows and switching between Mac and Windows absolutely intuitive. The integrated approach of displaying Windows software in Spotlight searches, context menus and the Dock is brilliant.

Free support is available via Twitter, chat, Skype, phone (Click-to-Call) and email for the first 30 days after registering. Email support is available for up to two years from the product release date, though you can purchase phone support when required for $19.95. A comprehensive knowledge base, FAQ, Getting Started guide and User’s Guide are available.

VMware Fusion 8.5: VMware Fusion ($79.99) is Parallel Desktop’s closest competitor, and is a little slower and more technical. A major upgrade is about to be released.

Veertu Desktop: Veertu (free, $39.95 for premium) is a lightweight alternative. It’s almost as quick as Parallels, but has fewer features.

VirtualBox: VirtualBox is Oracle’s free and open source alternative. Not as polished or responsive as Parallels Desktop, it’s a good alternative when performance is not at a premium.

Boot Camp: Boot Camp comes installed with macOS, and allows you to run Windows alongside macOS in a dual-boot setup — to switch you need to restart your computer. That’s less convenient, but has performance benefits.

Wine: Wine is a way of running Windows apps on your Mac without needing Windows at all. It can’t run all Windows apps, and many require significant configuration. It’s a free (open source) solution that just might work for you.

CrossOver Mac: CodeWeavers CrossOver ($59.95) is a commercial version of Wine that is easier to use and configure.

Parallels Desktop runs Windows and other operating systems in a virtual machine alongside your Mac apps. It’s a good option for those who still rely on certain Windows apps for their business, or gamers who can’t live without a favorite Windows game. It’s also a great solution for developers who need to test their apps or websites on other platforms.

If you’ve found native Mac apps that meet all of your needs, you don’t need Parallels Desktop. If you need to run just a handful of non-critical Windows apps, one of the free virtualization alternatives may be all you need. But if you’re looking for best performance, Parallels Desktop is your best option. I highly recommend it.