Magic Mouse vs. Magic Trackpad: Which One Should I Use? 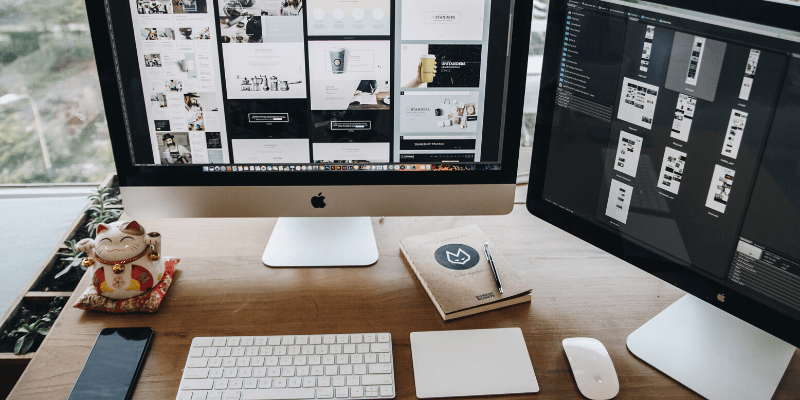 For the last few months, I’ve had an Apple Magic Mouse back on my desk—right next to my Magic Trackpad. It used to be my main pointing device when they were brand new a decade ago, and I wanted to see if I’d start using it again if I kept it within reach. I haven’t. The poor mouse has gone largely unused. I’m undoubtedly a trackpad fan.

The mouse isn’t ideal when you’re on the move, so before the trackpad was perfected, laptops in the 1990s came with some creative and unusual pointing devices:

Trackpads are better—they may even be the perfect pointing device for a laptop—and once they took over, all the alternatives virtually disappeared. But the mouse lives on, and for good reason. Many users find it best, especially when they’re sitting at their desktop. Which one is best for you?

The Original Magic Mouse and Trackpad vs Version 2

Apple produces three “Magic” peripherals—a keyboard, mouse, and trackpad (though we’ll ignore the keyboard in this article)—that are designed with desktop computers in mind. I’ve used the original version of all three from the first version that came out in 2009 until earlier this year. My new iMac came with the upgraded versions that were first produced in 2015.

That means that I had used the same Mac computer, keyboard, trackpad and mouse for a decade, and I didn’t upgrade because they were faulty. That’s a testament to the quality of Apple hardware. My youngest son is still putting them to good use. I’ve never had a computer last that long before, and durability should factor into your decision when deciding on a new computer or peripherals.

The Magic Trackpad is a large Multi-Touch surface, which means it’s able to simultaneously track the movements of four fingers independently. By moving combinations of fingers in different ways (gestures) you can accomplish different tasks:

The Magic Mouse has an optical sensor and, instead of buttons, it uses what is basically a small trackpad that allows not only clicks, but also gestures. This gives it some of the benefits of the Magic Trackpad, though using gestures on such a limited area can be difficult, and not all are supported. (See this Apple Support page to discover which are.)

The original version of the Magic pointing devices used standard AA batteries. They’d only need changing a few times a year but always seemed to run out when I was in the middle of an important project. Magic Mouse 2 introduced batteries that are rechargeable via a Lightning cable, which is a very welcome improvement. They seem to need charging more often (about once a month), but I keep a cable at my desk. I can continue using the trackpad while it charges, but unfortunately, the mouse’s charging port is on the bottom, so you’ll have to wait before using it. Fortunately, you’ll get a full day’s charge after just 2-3 minutes.

The Magic Trackpad 2 is quite different from the original. It’s larger and has a different aspect ratio, yet it’s sleeker because it doesn’t need to house AA batteries, and has a white (or space gray) surface rather than a plain metal one. Under the hood, it uses Force Touch rather than moving parts. While it feels that you’re clicking real buttons (like the original trackpad), it’s actually using haptic feedback to simulate mechanical clicking. I had to turn the device off to convince myself that the clicking wasn’t real.

By contrast, the new Magic Mouse looks virtually identical to the old one, and still uses mechanical clicking. It’s available in silver or space gray, glides a little smoother across your desk, and is a little lighter due to the lack of replaceable batteries. The rechargeable battery is a significant improvement, but overall, the experience of using it is the same as with the original.

Which one should you use? A Magic Mouse 2, Magic Trackpad 2, or combination of both? Here are some factors to consider.

I love Multi-Touch gestures and use them for just about everything. They feel very natural once you’re used to them, and it’s surprising how easy it is to access Launchpad, switch between Spaces, or jump to the Desktop by moving your fingers around. Some users love gestures so much that they create their own using BetterTouchTool. If you’re a tinkerer, a Magic Trackpad is the ultimate power user’s productivity tool.

The large surface on the Magic Trackpad really helps, especially with four-finger gestures. I use a Logitech keyboard with a built-in trackpad on my Mac Mini, and I feel far more awkward doing gestures on the smaller surface.

But as large as the trackpad’s surface is, it can’t compare to the large arm movements you can make when using a mouse. That makes a big difference when precision counts.

There have been a number of times when I used a trackpad to create detailed graphics, and I’d end up trying to roll the tip of my finger as slowly as possible to make the small, accurate movements that were required. I discovered that hours of those micro-movements on a trackpad can lead to frustration and sore wrists. In the end, I got the job done, but with the wrong tool. It would have been much easier with a mouse.

The graphics work that I do these days is much less complex. If it wasn’t, I don’t think I could have moved away from the mouse. But cropping, resizing and minor edits to images have been fine with the Magic Trackpad.

The large arm movements you can make with your mouse to help with precision become a problem when you’re on the move. You really need to be sitting at a desk to make the most of a mouse. Not so with a trackpad. They work anywhere—even on uneven surfaces like your lap or the lounge—and require less space.

Which one is best for you? You need to choose the right tool (or tools) for the job, and be aware of your own preferences.

Use the Magic Trackpad if you’re a basic user who just needs to move the mouse around, or if you’re willing to learn a few gestures to get more from the device. Getting things done using gestures can be much more efficient, and with the right software, power users can create their own for the ultimate boost in productivity.

Use the Magic Mouse if you have a strong preference for a mouse over a trackpad, or if you do a lot of work that requires accurate pointer movements. The mouse is a more ergonomic way to work, while an overused trackpad can leave you with wrist pain.

Use both if you prefer a trackpad for most tasks, but also need to do detailed graphics work. For example, you could use the trackpad to quickly scroll through your photos, then the mouse to make precise edits with Photoshop.

Consider a non-Apple alternative if Apple’s products don’t meet your needs or preferences. I love the Magic Mouse and Trackpad: they match the decor of my iMac, last for many years, and work well. But not everyone is a fan, especially of the Magic Mouse’s lack of buttons. There are plenty of very good alternatives, and you can read our best mouse for Mac review for more.

I currently have both of Apple’s pointing devices on my desk, and I’m happy with them. I suspect that unless the nature of my work changes significantly, I’ll continue to primarily use the Magic Trackpad. Which device is best for you and your workflow?