What Is 2D Animation? 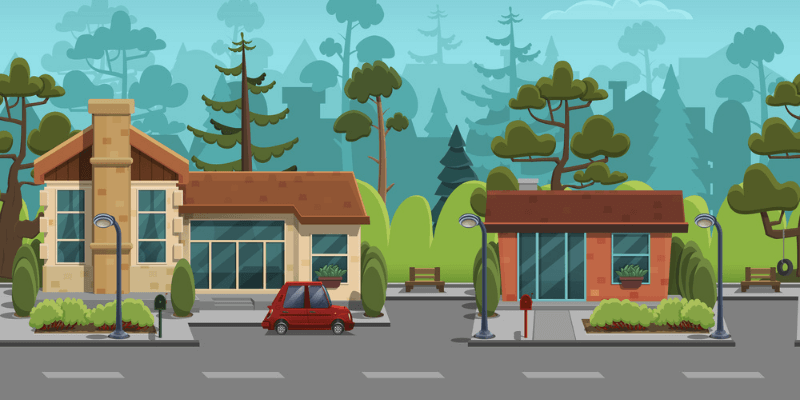 For decades—in fact, since Toy Story in 1995—3D animation was all the rage. Computer-generated graphics made cartoons more realistic. Pixar and other studios created feature films using computers to create indelible imagery backed up by superb stories. While 3D animation is still huge at the multiplex, traditional 2-dimensional animation has made a big comeback in other media.

Not too long ago, 2D was considered old-school. Once-adored cartoons like Looney Toons, Hanna Barbara, and classic Disney films seemed old and outdated. But not for long: 2D is back.

What exactly is 2D animation? How is it different than 3D? What caused it to start fading away, and why is it back now?

What is 2D Animation?

2D animation is the art of creating the illusion of movement in 2-dimensional space. The movement is created in only the x or y axial directions. 2D drawings often look flat on a piece of paper, without depth.

Pen-and-paper animation has been around for a long time. It was first developed in the late 19th and early 20th centuries. Early animations consisted of repetitively drawing objects in slightly different positions on pieces of paper or cards. The cards are then displayed rapidly, which gives the appearance that the objects are moving.

This process eventually evolved into putting pictures onto sequential film, creating motion pictures, and blooming into what we now call 2D animation. This type of animation was widely used for Disney Films, Looney Toons, and other popular films and television shows. You’ve probably seen some of the old original Mickey Mouse films, including Steamboat Willie. If you were a kid in the ’70s like me, you probably grew up watching them every Saturday morning.

The classic method of animation was widely used until the advent of computer-animated graphics almost thirty years ago.

How Is 2D Animation Different from 3D?

2D animation is different from 3D in the way that the objects and backgrounds look and move. Instead of being limited to the x-y axis, 3D adds in a third dimension along the z-axis. This gives objects depth and feel; they may appear to be moving towards you or away from you. 2D can only move from side to side, up or down, or some combination of the two.

Objects and backgrounds in 3D can also appear to have texture. The combination of movement in any direction and the appearance of texture gives 3D animation a more lifelike appearance.

What Happened to 2D Animation?

Classic cartoons, many of them legitimate works of art, were very detailed and complicated to create. Artists had to sit down and draw every frame. As computer technology became widely available, many 2D films used software to make the process easier. As these technologies evolved, animation evolved with it—and 3D was born. The art of drawing animated sequences frame by frame slowly faded away.

With its realistic look and feel, 3D animation grew in popularity with Toy Story, A Bug’s Life, and Monsters, Inc. While Disney’s Pixar films were (and continue to be) leaders in this technology, other studios soon followed. 2D cartoons remained popular with some specific brands like The Simpsons (America’s longest-running American scripted primetime television series), but for the most part, 3D took over after 1995—not only in films but television, video games, and more.

Why is 2D Animation’s Popularity Rising?

While its popularity faded for a while, 2D animation never totally disappeared. There were always old-school animators who wanted to preserve the art form. Not only did it not disappear, but its use is now on the rise. We probably see as much 2D now as we ever have.

Animated training and learning videos have become very popular with increased work-from-home and remote learning activities. Even 2D video games are on the comeback.

Don’t forget: The Simpsons are still around along with numerous other 2D animated series like Family Guy, South Park, and more. We continue to see 2D animated feature films in the theater and on Netflix, Hulu, and Amazon Prime.

We Can All Create Animation

So why is 2D technology on the rise? There are now loads of apps that can help almost anyone create animation. I’m not saying that just anyone can be a top-notch animator—that still takes special skills and talents—but it gives many amateurs the ability to have fun and create inspiring animations.

This is just one factor that has contributed to 2D’s resurgence: almost anyone can create simple short films, allowing them to get a laugh, make a statement on social media, or maybe get an Oscar.

2D animation is much easier to create, so that is another reason for its usage. If you ever watch a 3D animated Pixar film, just take a look at the credits to see how many people it requires to put a production like that together. Even though computer technology helps do much of the work, it doesn’t reduce its complexity. 2D can be created quickly with a limited number of contributors. With the right app, even one person can create a pretty good little short film.

Because it’s simpler and requires fewer resources, two-dimensional is cheaper to create. It can be created for a fraction of the cost of three-dimensional shows. This cost lends itself well to the advertisement world as well as the training and teaching arenas. Companies, instructors, and teachers can get their points across with an exciting short film produced on a modest or shoestring budget.

As the availability of cameras has become widespread, there has also been an increase in content creation. Almost everyone has a camera on their phone—anyone can create a video. But it requires actors. Actors cost money, and it can take valuable time waiting for them to be available.

Creating animation doesn’t require actors. This makes it cheaper, quicker to create, and no requirement to find a specific actor that fits your role. You can create any character you want. All you need to do is find voices for them. This option works great in the advertisement and training arena, which is one of the major reasons that 2D has skyrocketed.

The classic method of sketching out each frame and layering transparencies over backgrounds was time-consuming—and it’s been mostly replaced by computer software. That being said, there was an art to doing this. Because of this, 2D has not completely faded away.

Some animators still believe in and enjoy the classic methods. Nostalgia and the appreciation for this type of art often keep it alive. This helps to bring it back for newer generations to learn and put their own spin on.

While 2D animation once took a backseat to 3D, the classic method has been making a big comeback. Its simplicity and ease of creation make it a low-cost solution for many applications. You have probably noticed the abundance of 2D animation in television and commercials. As of now, it looks like 2D has a long, bright future.

Have you ever created any 2D animation? Let us know about your experiences. We would love to hear from you.